While I’m no longer following seasonal anime like I used to, odd bits here and there still caught my attention from time to time.

No regrets whatsoever – one of them being the good ol’ Eromanga…

Why revisit?
Haven’t you watched and laughed your butt off at this show already, Shoka?!

I could have sworn that I had almost forgot what kind of show Eromanga was upon entering its OVAs.
I had to remind myself it was that show of the season a lot of people picked for hatewatching. It was the show that reignited memes if not having created any.
The OVAs were–as expected–similar kind of cringe but left me hugely surprised as my alter-ego would always question the show’s alternate directional take. Yeah. Can’t get it out of my head; always talking about wincest~

Would Eromanga-sensei retain its entertainment value had it gone the way without… that?

Well, I couldn’t answer that so I guess I am now hoping for a well-rounded response.

They were very enjoyable, probably more so than the actual TV run episodes. It was especially the second episode with Sagiri which almost had me forgot about the cringe to her relationship with the oniichan.

With a touch of lovable but totally untouchable characters, some unrealistic mini story and you have a recipe for simple-minded fun. Just ask Emily. 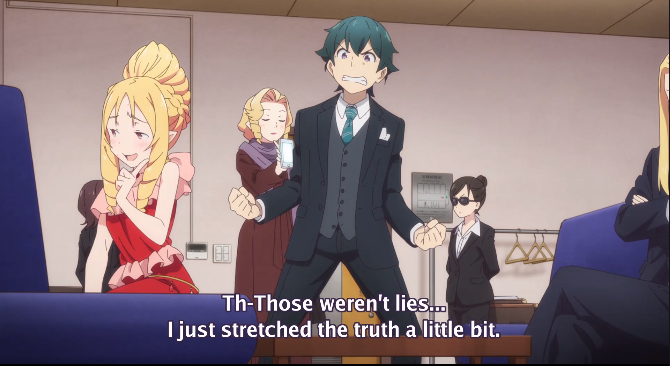 I haven’t the time to look up on who are responsible for the direction/scrip/choreography etc. because frankly speaking, it is clear as day that they went the most creative way possible for this period of time as well as integrating many things that were popular from as far as a decade ago. For example with Elf’s musical stage performance — that was made heavily popular back in my days with High School Musical. One notable thing from this period of time is the obvious usage of Instagram user interface in the ending credits. I do not know what you people use Instagram for but as for me, I am about the same as what is represented by Elf and her usage of it.
Seeing that alone makes me happy. 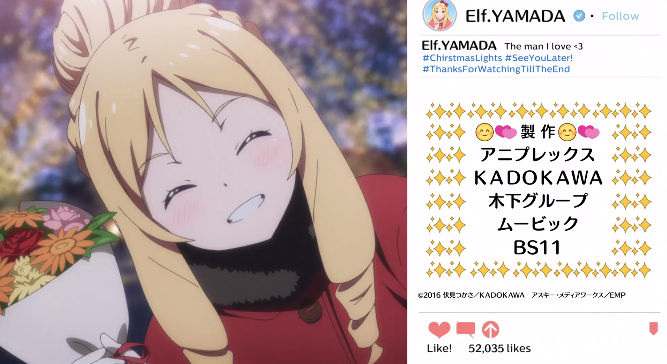 The first episode was more or less nonsensical laughter (because that is literally Elf’s personality, no?). The following one became somewhat more down to Earth, as expected from the little sister. Just never forget to keep eyes on the creep-o-meter though.

Of all the possible things wincest could have led the characters to do, let us not forget that in the end the characters in Eromanga-sensei are not written to be psychotic murderers or anything of the sort. None has yet to come close to the level of OreImo‘s Ayase, even.
And speaking of OreImo, I still firmly hold onto my belief that Eromanga has got nothing on the former in terms of impact and more likely longevity. First impression is as straightforward as the words read out and Eromanga TV series went for the quick memes with little investment in everywhere else so there was close to nothing to take home but memories of your reactions. The OVAs were something else, really.

From almost making me dial 911 to having me put my phone away, here is my impression:

I would bet my ass on how the OVAs did not have to be 100% faithful to the original material which allowed massive degrees of freedom for the director/script writer to fully make use of the preset that is Eromanga-sensei. What I am saying is that there is a high chance of the original novel author not being fully involved in these. The characters were taken for a spin, doing things we’d never seen them do in the TV series. Remember that anime “watchers” are human and novelty does a good job of enticing — anything new will have us look, simple as that. Whether it was Elf taking us back to the mid 2000’s with that performance or Sagiri showing us behind the scenes of the ending theme, I’d almost felt like I was watching a different show.

There were a few things which I deemed painfully obvious in trying to provoke my visual stimulation. Let me go through one of them.

Visual angle does make a difference; mastering mise en scène is important in making long-lasting impact shots like this. To me this is an oddly funny way of adapting to the “don’t judge the book by its cover” and portraying it. That said, if you are a random who has come to visit this blog and read this post without even knowing who is in the picture above, please…
She could be a university teacher in a romantic seinen show but never judge too quickly until you see the full picture.

Last year when I’d arrived in Thailand I quickly fell ill to food poisoning; not like it was avoidable anyway. There came my cousin who was on her school holiday, she basically nursed me back to normal within days. Maybe me being physically fit and well had a part but who knows.

Now this cousin of mine — I think I’d talked about her in one of my posts a very long time ago. Yeah. That would be her. The last time we’d talked to each other would be before my 12 years spent in New Zealand. She was still a primary schooler when she’d last seen me in person. She’s now eighteen so technically this is enough to make us strangers to one another but damn, she has better memory than I do and it seems like her first impression of me is definitely of a good one so there is that. You definitely wouldn’t come visit someone you are afraid of or not giving a damn about, right?

Now, why the story?
I honestly felt like what happened to me in those moments were pretty much a more extreme version of the second OVA episode, albeit some minor details differ like our ages and how my cousin can actually cook and do chores. Our age difference is greater than that of between Izumi’s and Sagiri’s so I have absolutely no right to complain about wincest.
And no, don’t think that far. Nothing of a sort happened to me; I just felt like saying wincest because it is funny. In fact whenever she tried something funny on me I’d always ask her if she’s seen Eromanga-sensei.
Too bad she hadn’t seen, let alone know much of anime.

Among a few things I praised Eromanga-sensei for, one of them I was not sure of until the OVA made me sure of.

If you cared enough to have watched the ending credits to this show, you would have known that on rare occasions the show does spare a few seconds to either make inside jokes related to the story that took place within the episode or to give us some “extras”.
Both episodes of the OVA did a good job with Elf’s Instagram and the more traditional Eromanga — the “what if”.

Spoiling the events a little:
Sagiri tried keeping every other girl out of her house, preventing them from seeing her bed-ridden brother. When we thought that they’d all walked away with disappointment…

Surprise jokes like this can be more effective than some set-up comedic punchlines, I swear.

So there you have it.

A piece of poo really looks like one on the outside; try to look inside and you might just find something better even if it ain’t diamond.

Oh wow. I almost forgot that it is Valentine’s tomorrow!

My (now ex) girlfriend cheated on me for her ex boyfriend just in time before the day and coincidentally I watched and wrote impressions about a show involving family love. Yeah. Okay. Nothing wrong about it at all. Okay!