Aha! It is that time again where I appear with feathers of wisdom!

I will gladly remind you that it is now July 2018 and for us owlets, that can only mean further advances into meaningful exploration when it comes to the things that are tied to our aim.

Naja precedes me in this month’s tour!
The topic at hand is “Mentor”. Usually this rings many bells for anything that scream teachers. But get this; there is clearly a reason why mentor and teacher are not of the same word with the same meaning.

Throughout our lives, we might have encountered someone that we admired as a role model or has guided us in some life dilemma. This mentor could be a teacher at school, a coach, a boss or team leader at work, or a family friend. Whoever it is that person impacted your life in a positive manner. For this month’s OWLS topic, we will be writing about mentors or mentorships in anime and other pop culture media. Some topics we will be exploring include how a mentorship impacted a main character’s life, the types of mentor relationships a person could have, and/or personal stories about mentors or mentorships.

And the person I am picking out to represent the topic of mentorship is already in the title… twice. Ironically, she can be unfitting for the title of mentor but will always insist on being one. Her stubbornness is most likely why she deserves some attention.

Just in case if you happen to still be feeling lost in the middle of nowhere — Xuanzang Sanzang is a playable character in the Japanese mobile game Fate/Grand Order. Well, I think many of you would be expecting another paragraph of elaborations simply because I have just had you all stepped into a Fate landmine.

You got that damn right.

The franchise is totally known for two things I personally find hilarious and for not-so-good reasons. One being the overly high frequency of gender-bending historical/futuristic figures and second being the oddly satisfying cultural appropriation. And for the FGO game, Sanzang’s character is among many ruled by these two things. Though I do understand that it is for the best possible chance of entertainment.
I mean… would you, an anime lover, rather read the actual Journey to the West transcript with original male protagonist or play FGO where you can savor some of this Sanzang and any plot she brings about?

The whole story is a work of inspiration from the Chinese novel Journey to the West (read it here and good luck if you decide to), where Sanzang’s character is obviously straight out of a monk who is referred to as Tang Sanzang. Other characters present in the original are portrayed by other (fitting) playable characters of the game. You either find out or just play the damn game with me.
Or don’t. I’m fine — totally fine with that.
Got all of that in?
Good, because now you can forget most of it and read what I have to say about our cute Sanzang-chan and her mischievous days as a mentor.

Like the original, the ever-so-busty, beautiful version of Sanzang goes on a journey to Tianzhu (you may better know it as India) to collect Buddhist scriptures and return to China after many trials and hardship. Throughout the game you are going to meet her three disciples also present in the lore; they are Sun Wukong, Zhu Bajie and Sha Wujing. The game makes this a little more amusing as she will also insist on making you her (number one) disciple despite being a ‘master’, which are capable of having at least thirty servants at disposal whenever she gets you into trouble. 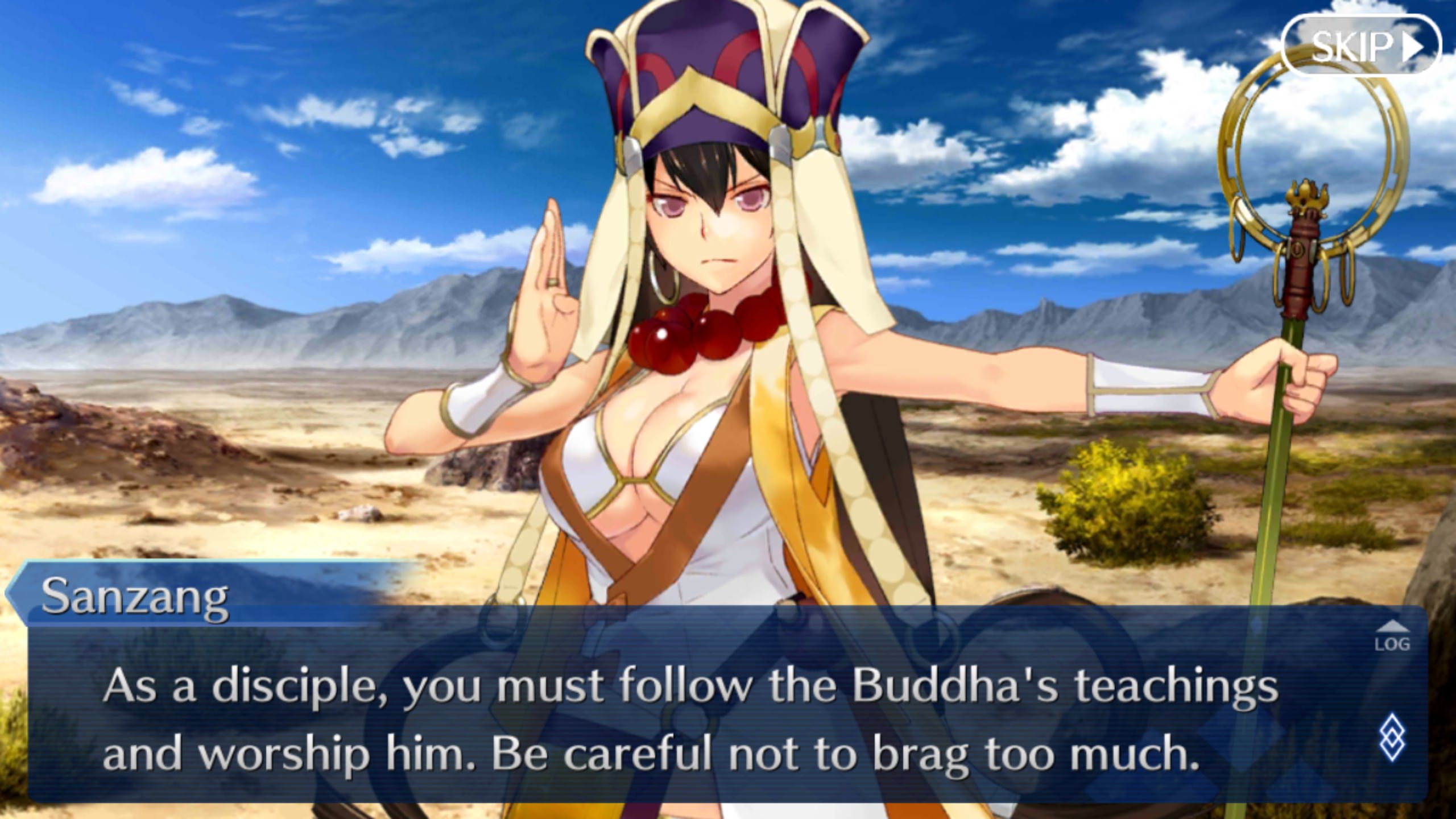 And that’s the fun part — Sanzang constantly gets you into meddlesome troubles!

Sanzang was like any other open-minded person before having taken on the journey, so it was natural she looked like a goofy nun throughout the quest to the West. Now, I do think that mentors in general are beyond teacher status; the title of teacher can easily be earned simply by teaching a few things while mentorship can only be demonstrated by constantly guiding people who have faith in you. Like teachers in need of students, Sanzang-chan is the mentor who needs disciples and not the other way around. she can very well be everything in the name of a rowdy companion who will never make your days quiet. However it is the post-journey Sanzang which befits the theme of mentorship as she basically remains goofy but with her eyes and mind wide open.

Our Sanzang-chan is neutral in every way. She is welcomed to stay by all factions and societies — surprisingly not for her titties. With purely love for people and best intentions for their lives, Sanzang has been to and seen all possibilities before you, the player, has even been summoned into the Singularity (a realm where something is definitely not in the right order). So even if you definitely know that something is wrong but not its particular, Sanzang’s open-mind will not be able to help you directly. Funnily none of the factions are right in their mind but since one is willing to rid of all others just to be on their own, Sanzang-chan has taken her attention to them. 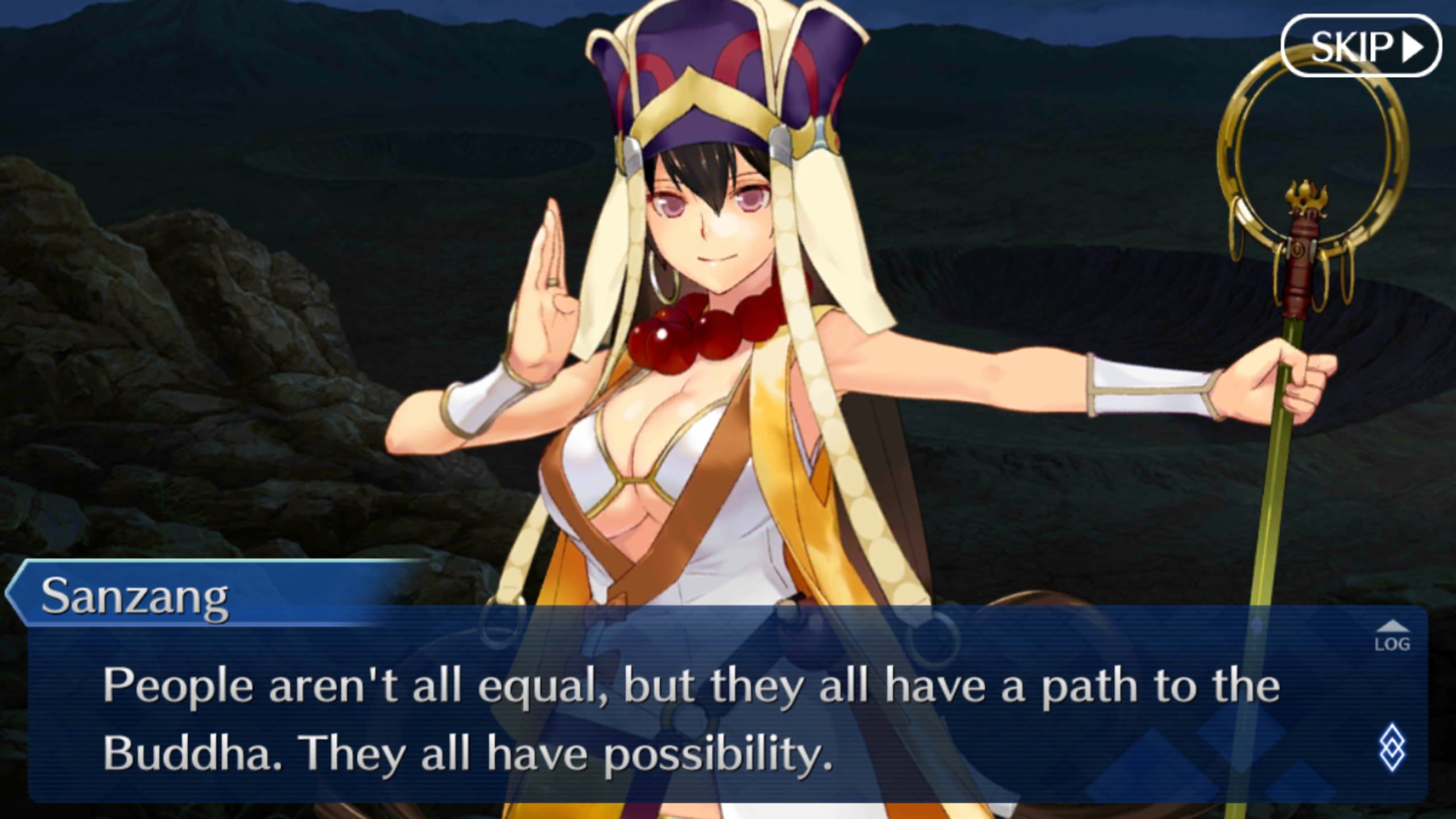 The Lion King of Camelot holds a selection ceremony every once in a while, where people from outer lands would gather in the front gates (heavily guarded by Sir Gawain), waiting to have a chance at entry into the “Holy City”.

She understands that not everyone may enter the utopia of Camelot, but what she refuses to acknowledge is the fact those who are not worthy of entrance will never see light at the end of the day. Not only majority of the people are refused entry; they are also killed on the spot just before the selection ceremony comes to an end. With the best intentions for people, she strictly believes that if Camelot is not the future for some people then they should at least live to see another.
Throughout the main quests, I was made to feel internal conflict as a part of me surprisingly did agree with The Lion King and her definite intention of creating a true utopia. Sanzang however would have appeared here and there to remind me that if it is man-made — it cannot be that good.

All that is left… is for you, the player, to take it in. When Sanzang really speaks her mind it is never the time to question her sanity, otherwise she is practically insane every other moment. Throughout the trials and hardships in Sixth Singularity, our Sanzang-chan would have taught me a few things before her final act of heroism and sacrifice:

Like they say: If you are going to slip-up, at least do it beautifully. I think Nasu might have achieved the biggest achievement in his writing yet — making Sanzang’s character and her story go literally all over the place while looking smug, adventurous yet cute.

Oh yeah, and I pray thy God to have her in my Spirit Origin because I hadn’t had the luck to land on her card when she was first released…

A very happy edit: I actually managed to summon her during the summer event because she spooked me while I was trying damn hard for Archer Arturia instead!

And that should spell the end to the journey for this post.

Your journey for this month’s blog tour is far from over as Mel will carry over the baton and have us know a thing or two about mentorship seen in anime!

Now I can go back to collect some more waifu in the game, ciao~