Howdy! I guess May will be that month where my blog seem like it is dead. But as self-promised, I would gladly back down to posting monthly, or in worst case yearly, instead of downright quitting.

For this month our theme is set to be of Movement. Check out the entire month’s tour here!
You can definitely count on me to come out with a post that will be truly moving.

We join movements, organizations, and systems that align with our own personal values and beliefs. Sometimes we join these groups because they believe in doing good and making positive changes in society. However, these movements can turn sour when a dictator arises or behind the good intentions, there’s a hidden agenda of oppression. It is in these groups that individuals start to shape their identities by questioning their values and beliefs or conforming to the system. This month, we will be examining “real and/or fictitious” movements, organizations, or systems in anime and other pop culture mediums, and the positive and negative effects they have on individuals and society.

You can also count on me to be serious about a satire show, because One Punch Man—under the surface—is a lot of things the mangaka ONE wants us to see in the real world and realize that your attention to your surroundings is needed.

I still think that One Punch Man is among the best shows for practically anyone to start their anime journey, regardless of origin. You can never be too old to watch a caped baldy fist-up scums of society. Coincidentally, if you have yet to experience some of Saitama’s dilemmas then I guess you are probably too young to be calling yourself a full-fledged adult — no offense.

The show One Punch Man follows the seemingly ordinary and unimpressive Saitama, who has a rather unique hobby: being a hero. In order to pursue his childhood dream, he trained relentlessly for three years—and lost all of his hair in the process. Now, Saitama is incredibly powerful, so much so that no enemy is able to defeat him in battle. In fact, all it takes to defeat evildoers with just one punch has led to an unexpected problem—he is no longer able to enjoy the thrill of battling and has become quite bored.

Let us smash the satire surface and dig deep into things that make up Saitama after the end of the first season. Before I can even take off however, someone please… remind me of what makes one a hero; it had been Saitama’s childhood dream for all those years. According to the man himself — being a hero was not much of beating up monsters into pulp but rather to protect himself and more importantly others from harm. 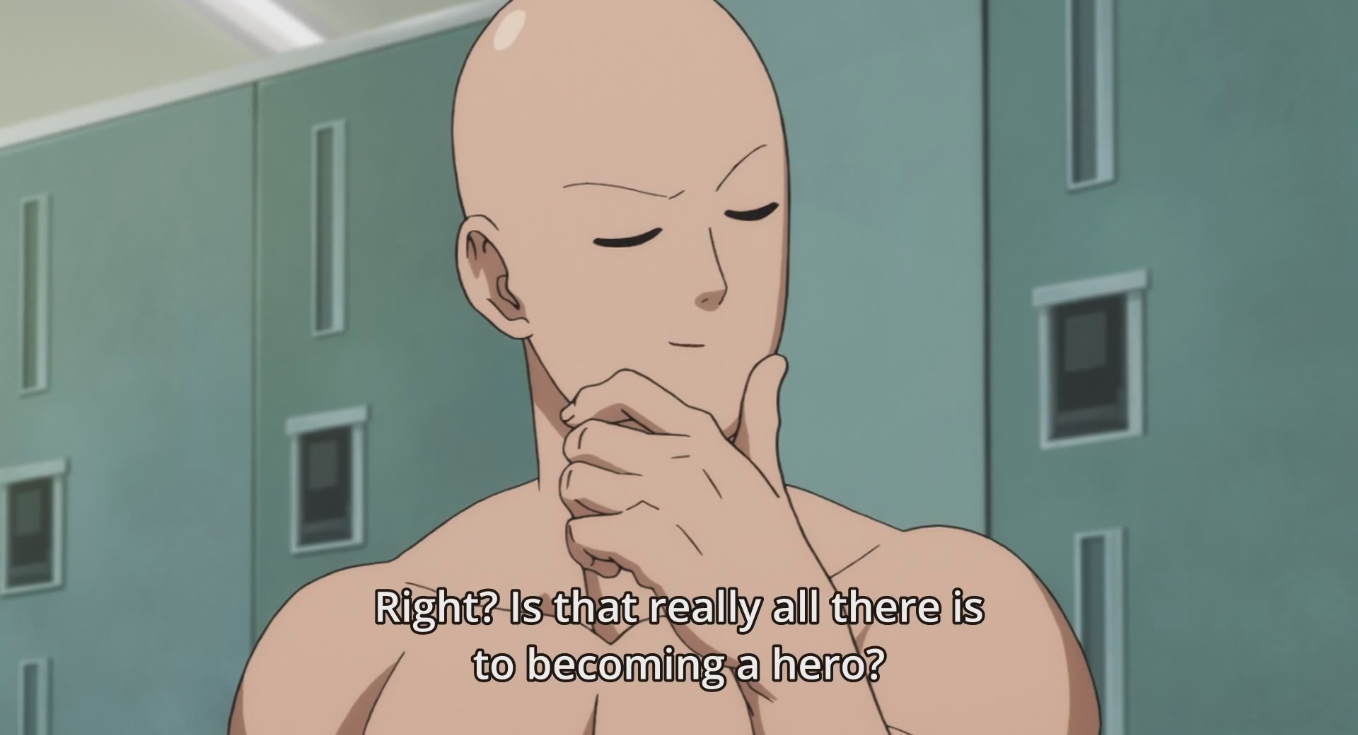 That was until the very moment he’d realized nothing could physically stop him short. When Saitama had found no challenge in physical brawl, he could only have dreamed of having one. 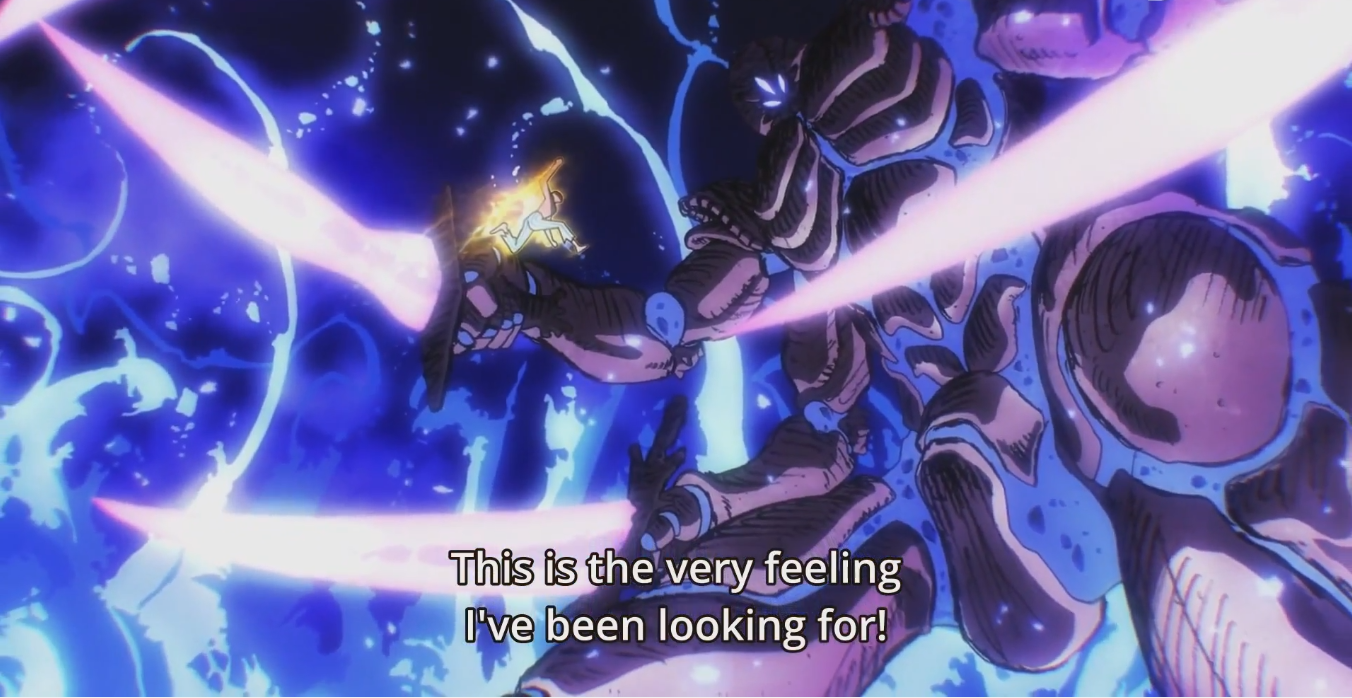 This all changed with the arrival of Genos, a 19-year-old cyborg, who wished to be Saitama’s disciple after having seen what he was capable of. Genos proposed that the two would join the Hero Association in order to become certified heroes that would later be recognized for their positive contributions to society, and Saitama, shocked that no one knew who he was, quickly agreed. 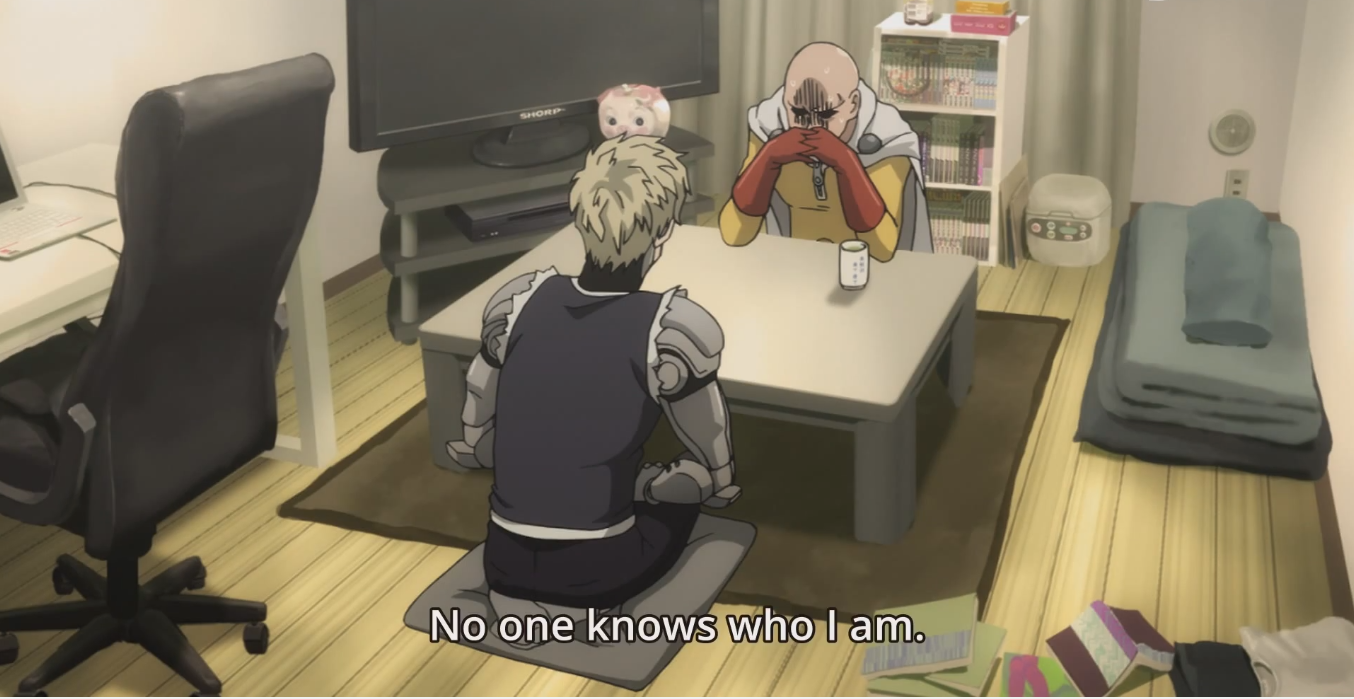 What Saitama hadn’t known until it became too late, was that by joining them, he’d basically gone back to square one of his adult life — when he was still job hunting.

On the surface, there are a few things about the Hero Association worth noting since all the points have gone over Saitama’s head and probably yours:

The Hero Association is a superhero organization founded by the multi-millionaire Agoni in order to fight monsters, criminals, and various threats. It uses a Hero Registry to indicate which characters are recognized as professional heroes, with anyone who is not registered to be considered “a pervy freak who spouts irresponsible nonsense.” Agoni created the association after his grandson was saved from the monster Crablante by an unknown bystander (who turns out to be Saitama). It is also financed by donations from citizens. The association is made up of four tiers from the lowest C-Class to the highest S-Class. The heroes within each class are ranked numerically, with the highest rank 1 of each class being eligible to advance to the next tier if they so desire. New heroes must take an exam in which 50% is a physical test, and the other 50% is a written exam and an essay. A passing grade would be 70% or higher and directly placed in a class from 70% being barely C-class to 100% being eligible for S-class. They are then placed at the lowest ranking for that tier. Heroes can ascend or descend in their rankings depending on their deeds; C-Class heroes who are inactive for a week are dropped from the Registry.

But because of how much influence it has had on people throughout its time of existence, the association itself has probably become an essential to the people’s knowledge since birth. This would also make ‘donation’ towards the association an almost must-do for everyone living within the influenced vicinity (presumably all of Japan). Looking at it carefully and I can hardly differentiate between the Hero Association and very well known organizations in real life, such as Red Cross. Both exist to apparently ‘help’ those in need, albeit within different specialty. Though that is only on the surface; while I do not know the full details of say, Red Cross, I am more than willing to guess that large organizations like this would always have big boys/girls in white collars making a living from people’s donations, calling themselves the higher-ups.

Also—as written above—you really cannot forget the fact that it was created by a millionaire. Most things created by the rich are hardly for everyone’s good but more likely for the rich themselves.

This is the part where Saitama, once having met with, began to reinitialize his thoughts and goals as a ‘hero’.

Let us tap into real life situations for a moment.
This is not news flash: In any given large organization, never will 100% of the money go towards those in need when you or anyone you know/care about donate. There are truly cases of chairmen/women not taking in percentage profits, but 1.) those people are probably, already financially overloaded so either they don’t feel the need for more or that they just want to do good deeds, and 2.) that scenario probably exists around less than 5% of all organizations on the planet Earth.

This world is a cruel place and the author ONE is not going easy when tracing parts of reality into his work of fiction. Can you imagine Saitama voluntarily working for Red Cross?

That would be another point regarding the idea of one’s values/beliefs and organizations’ alignments. Saitama was unknowingly tricked into believing that he would become a full fledged ‘hero’ by joining the association. Genos is not to blame though, I mean the guy is pretty dumb himself and was also tricked into believing alongside Saitama.

Tricking people into believing things is nothing new to a corporate (which the Hero Association fully deserves to be known as). The power of brands alone is enough for making people think that something is better than another. Just look outside for a minute or better yet, on the internet. You are not going to live your life without seeing Coke vs Pepsi or Apple vs practically everything that is not Apple.

The way I see Hero Association however, is not of corporates like those. The association is one giant house to heroes of all talents range, abilities and morals. I would quite like to look at it in a way that each and everyone involved can have impact on the overall setting.
That’s right, the Hero Association (and the people who run it) looks like a music recording label to me, where heroes are simply just artists ‘owned’ by them.
Now that I think about it, I would really, really love a prequel to One Punch Man, where I get to see the formation of Hero Association and how much oppression it took for stupid heroes to join up and eventually form an organization we see now.

Artists live with their careers differently. Almost all of them started doing it for passion, some still do it for a living, some others keep on being passionate about it while there will be a certain amount of people only doing it for fame and scandals. I loathe the last guys in the entertainment industry and it is probably no coincidence that I also dislike Amai Mask.
There is so much hint about him being a tragic hero but even then, I just couldn’t care less.

Though Saitama really wanted to be recognized as a hero, he really didn’t want it in a way that would require maintaining his reputation with the public via social images. So when the Tank Top brothers came to do the blackmailing on him, it was from this moment Saitama had to self-clarify that he’d only wanted to be a hero for fun. All was fine and well except that he could not be a hero for fun had he cared about the association—the impact his actions had on it.

Yet Saitama remained lawful neutral. He could have most definitely rebelled against the Hero Association and removed its physical existence within less than an hour but he chose to live his life out only for himself (and maybe, just maybe Genos now as well).

Saitama had already been fine before joining the Hero Association so there was really no reason for him to conform in the beginning. Only if someone was to stick an old saying into his head sooner then he would not have had to go through this mess.

Respect is earned, not given.
But Saitama owes the people of Earth nothing.

My wish has been answered however, as the ongoing manga has a character that does exactly what I would expect since the Hero Association screams oppression and everything else in the name of dodgy. Though, I’ll leave it to you to find out in the spoilers!

Ah, not again! Whenever I signed up to write about anything for OWLS, I feel as if I can go on and on forever to write about everything else about the show outside of the intended theme. I think it is a bad habit of mine to constantly switch topics but at the end of the day, I only need an ear to my ramblings.

If I do come back for next month, there is a high chance that I will involve One Punch Man again. That is only if the higher-ups will let me reuse the same title for two consecutive months. Okay now I feel oppressed but do not get them wrong. OWLS highly promotes diversity and I think it is best to not talk about the same thing for too long.

Next up in the tour will be in hell of a playground.
Not your typical playground — Yaoi Playground!

You can probably guess the orientation of her topic, but check her out nonetheless!

And that is more break time I can spend collecting waifu on Fate/Grand Order. See you next time, after whenever I get sick of this Gacha hell!