Yorimoi without a doubt has one of the strongest, if really not the strongest debuting episode in 2018 Winter Season. I’d initially wanted to simply review the episode on its own but the more times I re-watched it, the more evidence I’ve found as to why so many people—myself included—were instantly hooked into the series.

This is one of those shows which reward you with tiny extra details for each re-watch. You might as well call them subtext since they are intended to not be noticeable on our first watch.
Subtexts involve reading between the lines for the most part, but we tend to only remember:

When having to think about what we see and hear simultaneously, characters come to mind first and foremost. Don’t we just love strong characters who can keep us engaged for full 23 minutes?

Delivering subtext also needs to have a flow, and Yorimoi has that part fully covered with some seriously witty scene direction. Check this one out here for example: 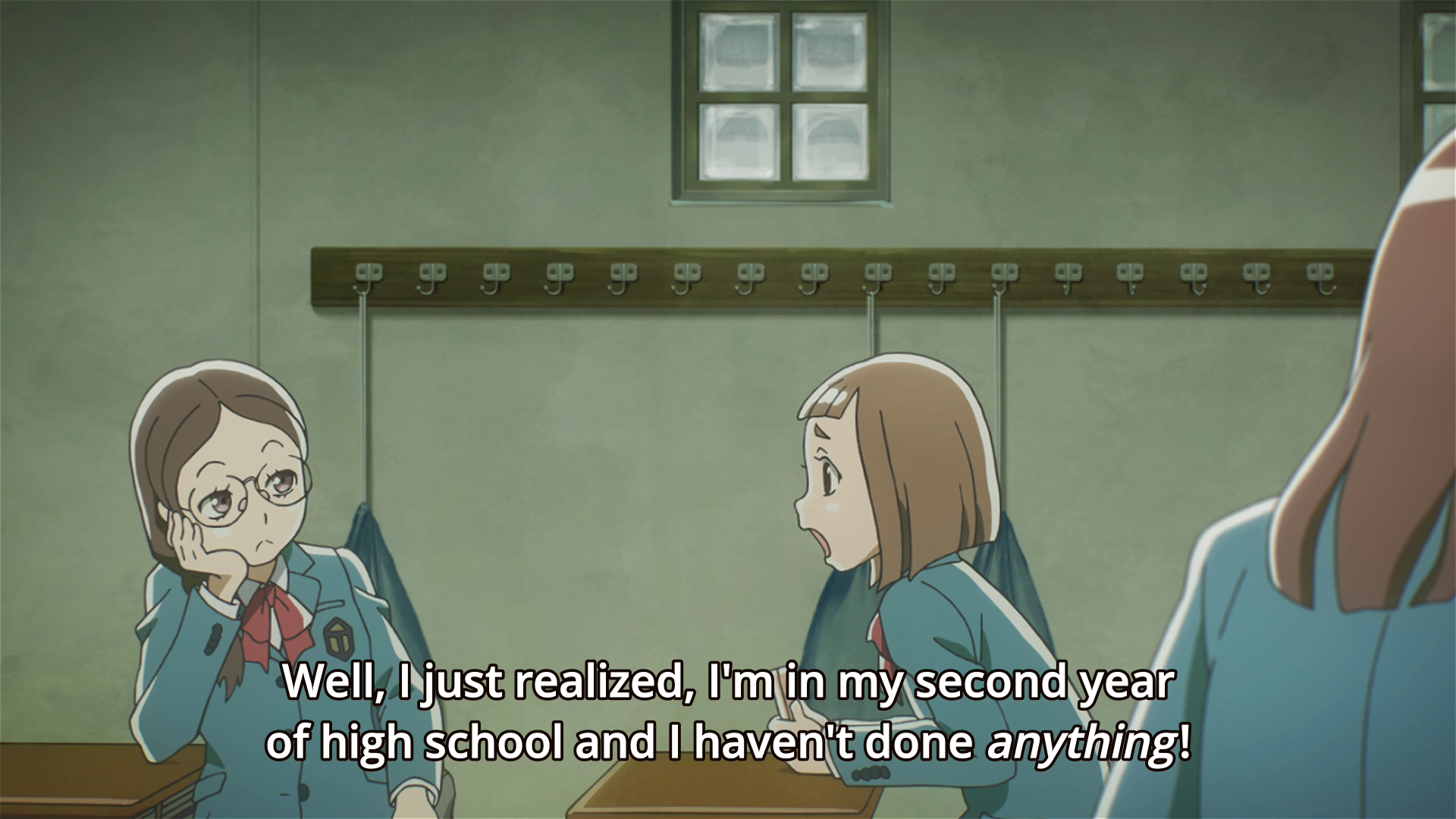 Mari went to complain to Megumi about not living her life like how she wanted to and that she needed to start doing something worthwhile soon. The subtext comedy is used directly against Mari as seen by this shot of inscriptions left by students, hers included. All of the messages were of encouragements, coincidentally to Mari who hesitated to begin her life’s journey.

And then there was…

Megumi asked her about what she really wanted to do, to which Mari replied with, “to get the most out of youth!”

And then came the witty direction cue: 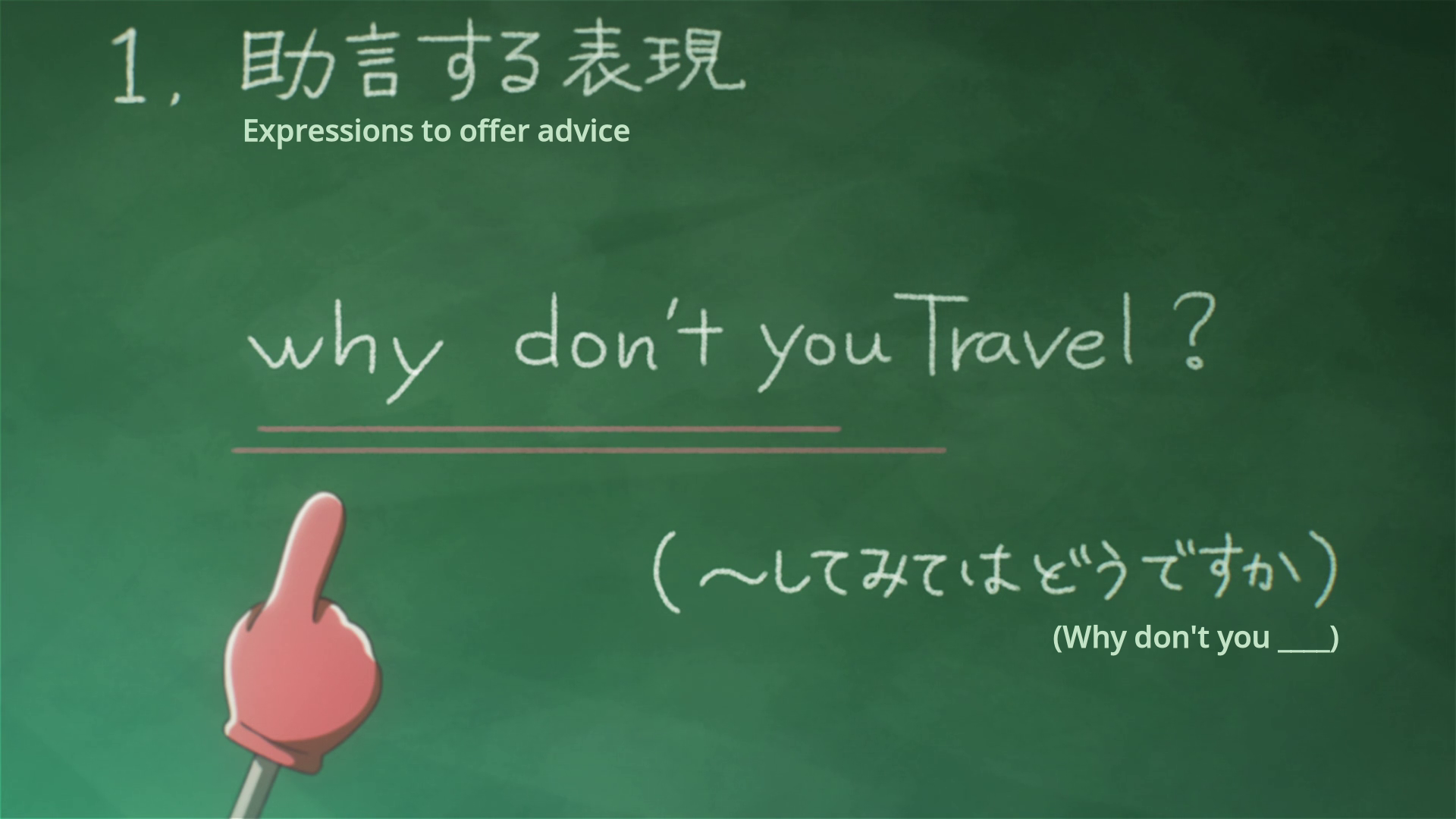 The scene quickly flicked to the picture above, right after Mari had given her answer. Totally not coincidental.
The conversation was carried on to an English class which the picture above was a part of, too. After giving out her plans to Megumi, the teacher caught Mari to be distracted, came knocking on her head with a book and a boy who was made to stand up to read an excerpt out loud said, “Enjoy your trip.”

Honestly, all of this was well timed; I had a good chuckle.

Thing is, subtext comedy for Yorimoi is not even exclusive to the first episode. Here is probably one of my most favorite instance of its usage in episode 10:

If you are familiar with the characters at all, this shot represents one of the most likely event — the other being nothing happens. Yuzuki (with a knife on her) is careful and well-rounded in quality checks while Hinata (pointed as a culprit) is basically a goofball.

This one can be hit or miss for many as comedy is extremely subjective. For me however, spotting each and every instances of it made me say “thug life!” as I chuckled away at the silly things these girls have done. There is something about breaking the rule which fuels my immoral satisfaction since I am the “rules are made to be broken” type of person. Never do I feel like conforming if alternatives produce no harm.

When Mari had found Shirase’s million yen, she’d tried her best to deliver the goods to the latter in the least fishy way possible.

Or so she’d thought…

It is not like we have never seen such things in our lives. They are everywhere and you have probably laughed at them a few times upon your discovery. 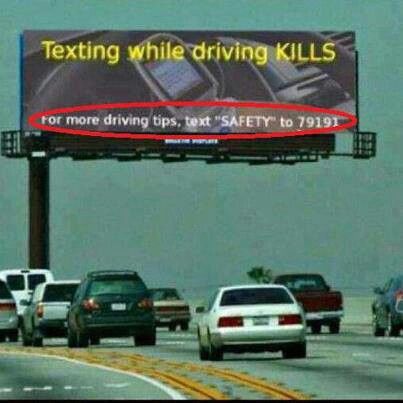 Mari’s act of transporting the million yen is a combination of witty subtext comedy and rule-breaking humor, kind of like this picture below.

It was not just Mari but Shirase also!

When we were first introduced to her from the front angle, the first thing she did was already considered comedic. Scaring the living hell out of her should already have some of you sadists laughing your butts off but her reaction was another level of accident.

Intentional or not, Shirase fits right in with these thugs below:

When Mari opened up the envelope to find a million yen Shirase had dropped, a poster behind the her was jokingly making viewers feel like Shirase had earned the money either via questionable means or pure luck. By the end of the episode however, it was revealed that Shirase deservedly earned the million yen from sheer hard work in her part time job — all of it.

Had the first episode of Yorimoi been made up of pure comedy, I would have been likely to drop it cold. Credits where they are totally due!

Expertise in visual direction could also be seen from the more meaningful moments from the first episode. Because of this, this episode alone felt much more like a mini movie than something you would see in TV series. The audio half was not left behind either; just how often do you get to hear a full version of an ending song on the very first episode of a TV series anime? Screen time matters, you know?

That however, was the episode’s biggest strength — the ability to be well conclusive despite facing time restriction.
There is an undeniable trace of inspiration from the likes of Kyoto Animation, namely director Yamada Naoko, who is very well known for her powerful but subtle direction. That said, the first episode of Yorimoi alone borrowed what made the entire K-On! series feel amazing after a full watch — the end reward. Let’s find those traces now!

Nothing makes viewers feel more accomplished than seeing homages, especially ones with clear, positive differences. Again, who doesn’t like seeing success and improvements?
Within one episode, Mari’s first step into her journey felt fully representative. The depiction of her courage was a competent sub-plot to the mysterious master-plot. It is not just the first episode but pretty much every other ones after; they all have little stories to them. While we knew that Mari would definitely go to Antarctica, the first episode definitely distracted us from looking at the destination and had us look at every other little things that would lead to it. Yorimoi definitely conformed well to the simplest yet important rule for slice of life show and that is to make viewers either feel like they have been there—done that, or feel like wanting to revel in the experiences these characters have been through.
Did Yorimoi make you want to visit Antarctica in any way?

Here we have Mari before she’d met Shirase.
She would kill for a grand journey—for a fulfilling youth. Though in her first attempt, she had left her messy room and: 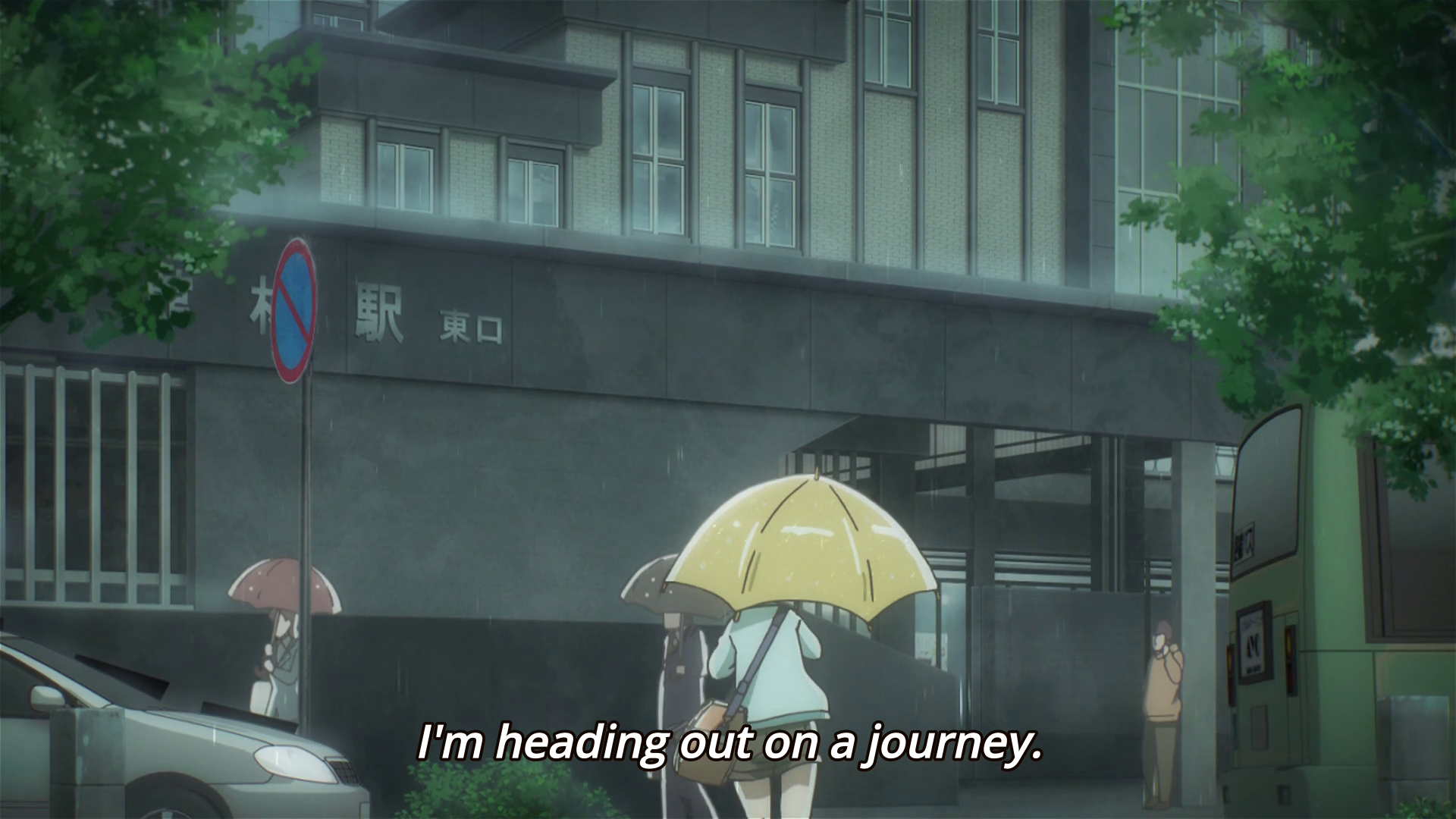 This departing train cliche—or rather technique—is probably your number one visual storytelling choice in anime. The camera could have been on the other side of the train but it had to be there because it was intentionally showing the end-result of Mari’s follow-up to her decision.

So when she’d claimed that she would be out on her journey but ended up not boarding the train, the scene carried on with her monologue regarding…

The first time this scene had been witnessed, we would have been made to believe that it was intentionally comedic as Mari ended up coming to school after such a big, rebelious and decisive action. It was not until near the end of the first episode when after having met Shirase and her ambitions, Mari’s rebelious resolve doubled (or maybe even quadrupled) in strength. But all it took to portray her change was a change in the weather. That however, was only scratching the surface since everything else which followed were great examples of lenient visual storytelling — you could definitely tell that changes took place by just looking at the scene.

Not like there was much of anything else in there at the time, except Mari’s monologue which was almost identical to when she chickened out the first time.

Mari’s second attempt at getting the most out of her youth started with her leaving her fully tidied up room and: 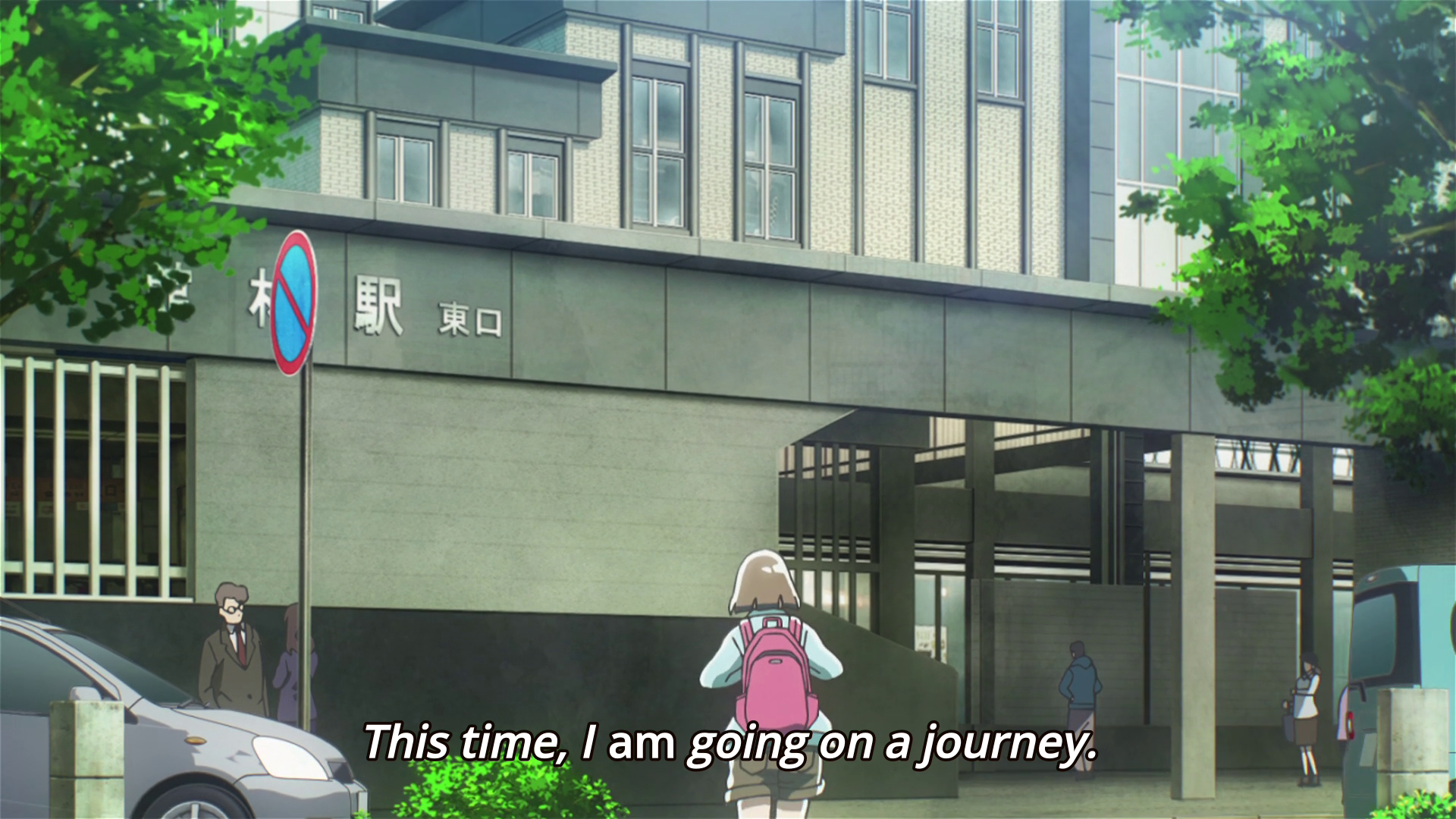 Having not been able to spot Mari behind the departed train felt like a true, progressive event. There was some satisfaction in realizing that our lovely protagonist was able to take a much needed step forward but at the same time there was also a feeling of being left behind, literally. Mari was no longer at the station. There were two strong possible outcomes for the scene; first being that the episode literally ended there because throughout the entire episode, we had been told non stop that Mari wanted to go out on her journey. It did not matter where she had gone to; she did go out and that is what counts.

The other outcome from this scene would be everything else that made up the rest of the first episode — Mari’s (and Shirase’s) start into their journey, shown in slices (of life) via a great montage which masterfully delivered in both visuals and audio.

The final moment of great, serious visual subtext had to be with these birds which might have as well represented the four characters living in Gunma. Of course, we did not know that there would be only four heroines at the time when only the first episode went on air and that Megumi would not be one of the four. 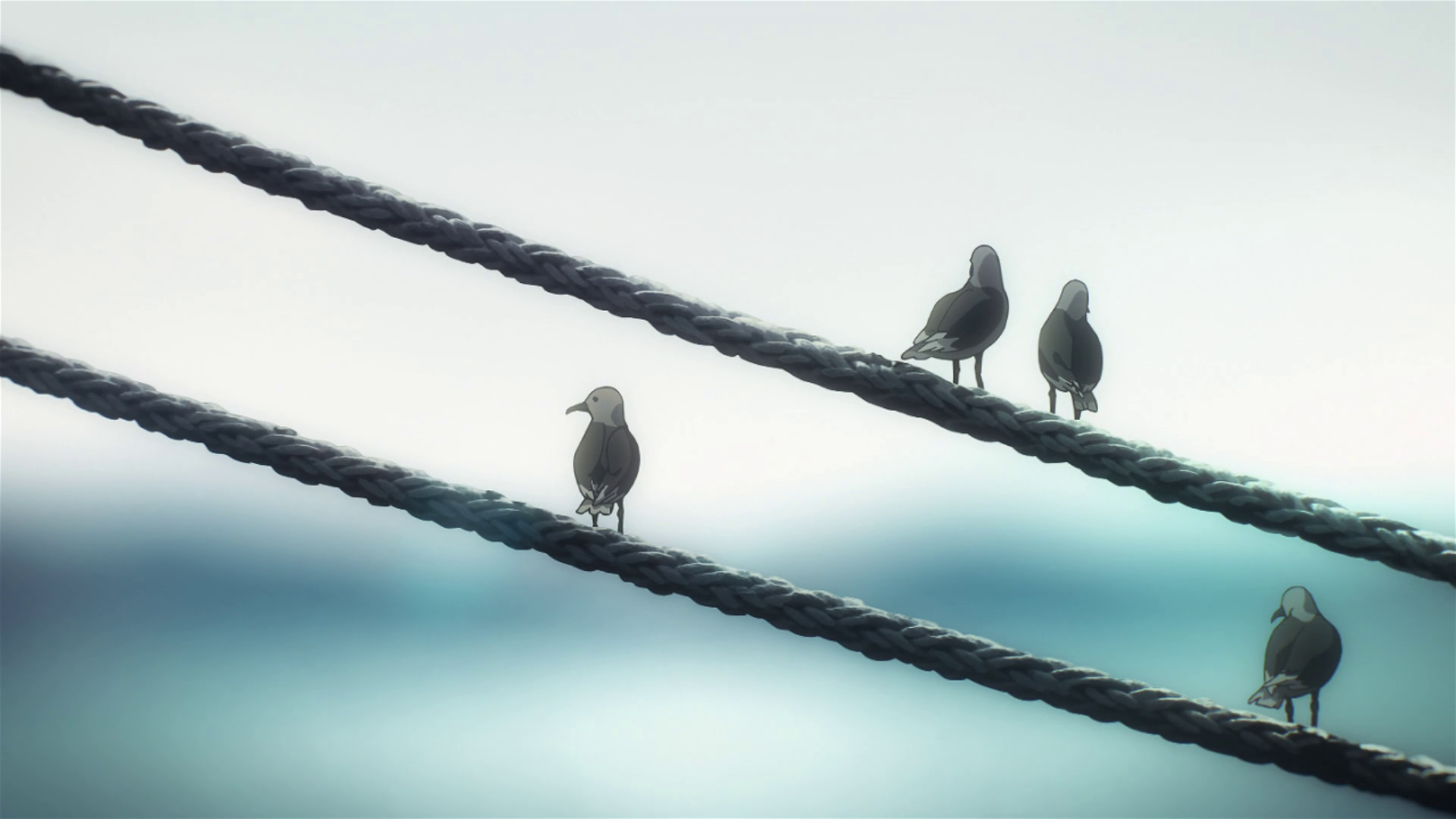 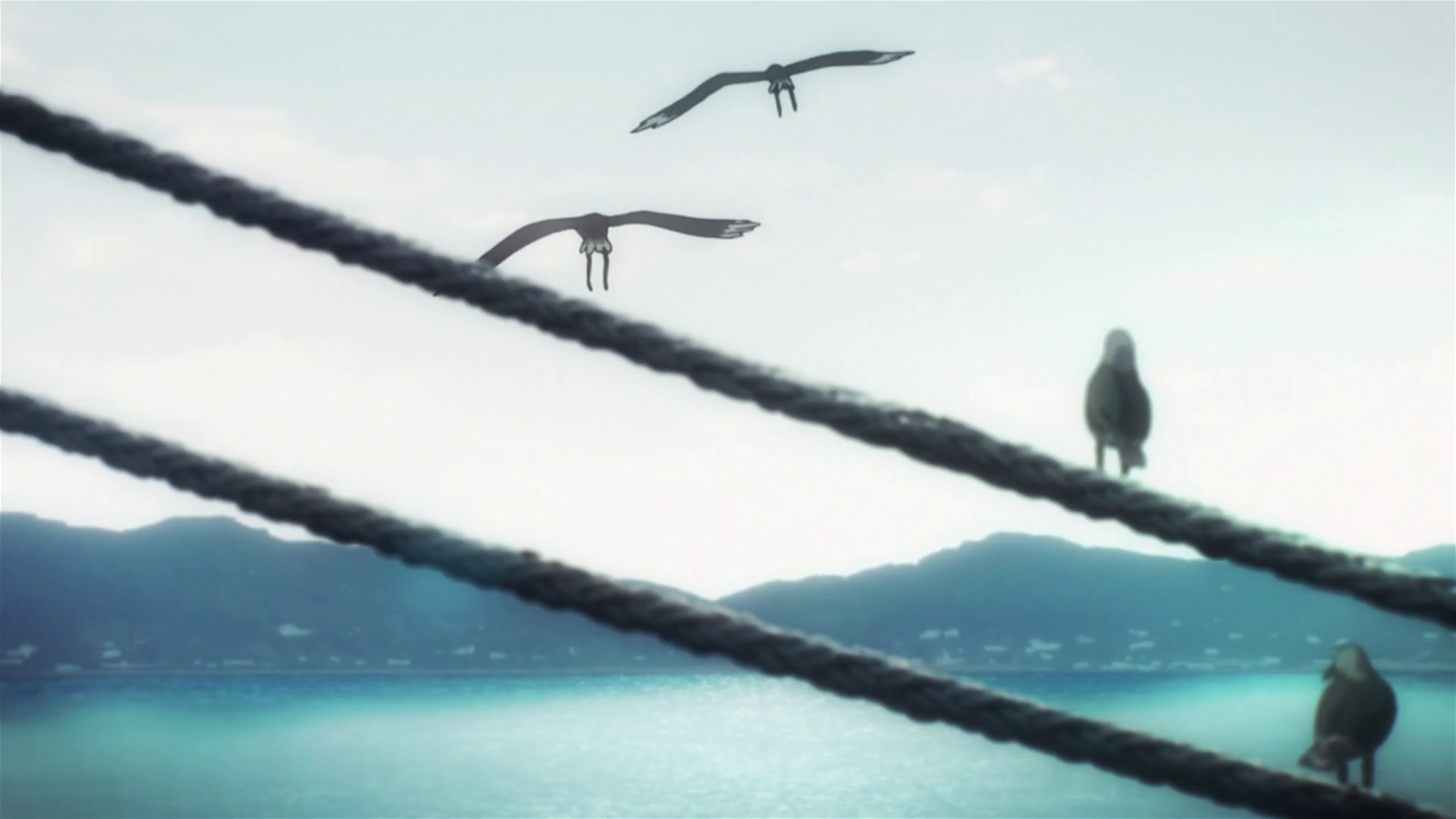 After having finished the series, it should be easy to tell which bird represented who. At the exact moment two of them flew away, Mari’s monologue could not have been better placed.

“My youth sprang into action!”