W-welcome back to the twentieth day of the challenge. Here we go…

Anime Character That Gets On Your Nerves

While you are all getting busted up by screams of pain and screams of–
–wait, why the hell do you scream, Asta?

I’m forever left with my nerves wrecked after having watched the movie Suki ni Naru Sono Shunkan wo.
And the character that came on top of the annoyance list is no other than the almost ‘NTR’d‘ Enomoto Kotarou! 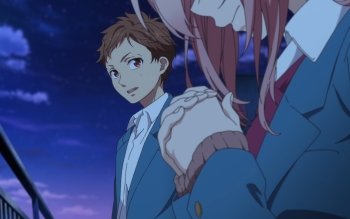 The guy she tells you not to worry about:

The movie is roughly an hour long but Kotarou’s character bored me much more than a few episodes of other horribly boring anime shows. Flaming issues with the movie were mostly overlooked from my part, it was just this guy I could not accept. It was still far too unreal even for a shoujo demographic anime.

How did people of HoneyWorks screw up a main character so bad?
Oh, did I mention that he’s a main character in the movie? Transitioning from a few 4-minute Vocaloid videos to an hour-long movie should be taken as a grand opportunity to polish up the characters, especially leading ones. Maybe it is just me; maybe he’s a true representation of Netorare (NTR) and since I am not one, trying to understand him by putting myself in his shoes only resulted in a bad end.

Some of the most annoying things he does (very well):

And for the ONLY time he had a chance for redemption, when Hina is left heartbroken, he still couldn’t come up with anything reasonable enough to put a dent in the senpai his romantic crush loved.

Wait, I think that I might have accidentally listed absolutely everything wrong with this guy. Oh well, let this picture summarize everything about him.

I’m going to keep this one short because talking about shitty things makes me feel like shit. It’s cause and effect at work.

See you back here tomorrow where I will flip the sad table and let you in on the character look to whenever I need to feel good!