It has been a while since I’ve encountered an opening song specifically written for an anime and actually contain a hell lot of meaning within the lyrics. I have already gushed out my appreciation on how Japanese lyricists work their ass off to have absolutely no lines in verses and choruses the same in their songs. It’s truly the case for this song as well, you can check the lyrics out yourself and join me in the appreciation.

The second pre-chorus of the opening song even has a line saying, “Right now we’ll prove that it was all worth the wait!”

How right they are.

The wait was worth it! Guys! My happiness can easily be described by all of the four tracks featured in these two EP’s! 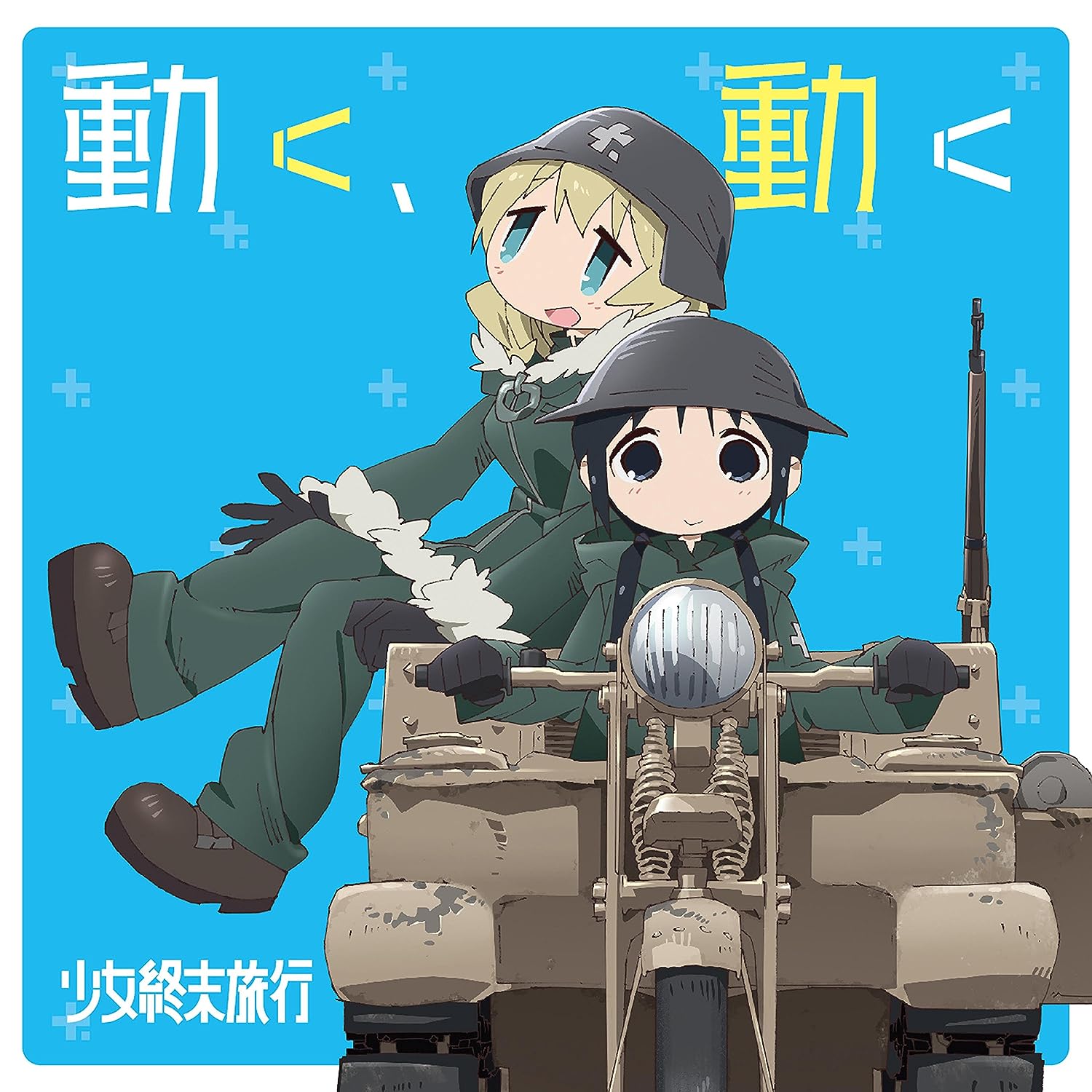 The word Ugoku is a verb meaning ‘to move’ and is mostly used toward inanimate things, similar to telling some fatty to move aside.

I really love how the subtle meaning behind the song’s name works; the word also means ‘to operate’ which is used in frantic moments like trying to start up a recently broken machine motor while saying, “Go! Go!”

While a front-running theme of Shoujo Shuumatsu Ryokou is exploration, the show also revolves around an idea of operations; do things work or not?
Though, exploration isn’t exactly the right word here; the duo constantly revisit all sorts of things they sure to have seen at least once in their life, fish included. They always wonder if the things they’ve come to encounter can be used to enhance their quiet and lonely lives as they have yet to see light at the end of a tunnel. I swear that the song is of a happy note but the lyrics almost made me cry because it symbolizes finding hope in hopelessness.

The idea of operations is made very clear in the eighth episode when Yuuri fiddles with probably a manual tuning radio and the duo go on to wonder why people keep things that no longer work in procession.

As the show goes on, we will be with Chito and Yuuri on their journey to finding things that work for them. Otherwise the chorus would send chills down our spines because, “If it were all a bad joke, it’d surely be chilling.”

Back to the song itself, the lyric is clearly written by a freakin genius as it is easily complemented by the most creative animation choreography for 2017 Fall Anime Season.

The vocals for this song are just perfect! I wouldn’t pay for Adele to sing this song, let alone any top mainstream J-Pop artists. This is a one rare case where power of seiyuu is really put to show; it’s cute, it’s pop and best of all they are in total sync.

Now, for anyone who has acquainted with me long enough would know that I’m clearly here for instrumentals. Ugoku, ugoku is a full on delight in the instrumental side — lovely! Synth-pop is absolutely one of my most favorite types of instrumental music.

The second track’s name is also likely involved in the show’s running theme.

Now this one has a more optimistic side of pop genre, even the vocals from both seiyuu sound happy and uplifting.

So if you are in need of happiness in life, try Chito and Yuuri out.

It has come to my attention that Minase Inori is quickly becoming extremely popular and her talents sure back that very fact. Of course, the role that boosted her career is no other than Re:Zero‘s Rem but even I will have to accept that Rem is old—it’s time to move on. She’s also pursuing a solo music career and without a doubt, she’s doing hella great. It all reminded me of when Miley Cyrus was happy being Hannah Montana; Inori is pretty much like that right now, but even happier. 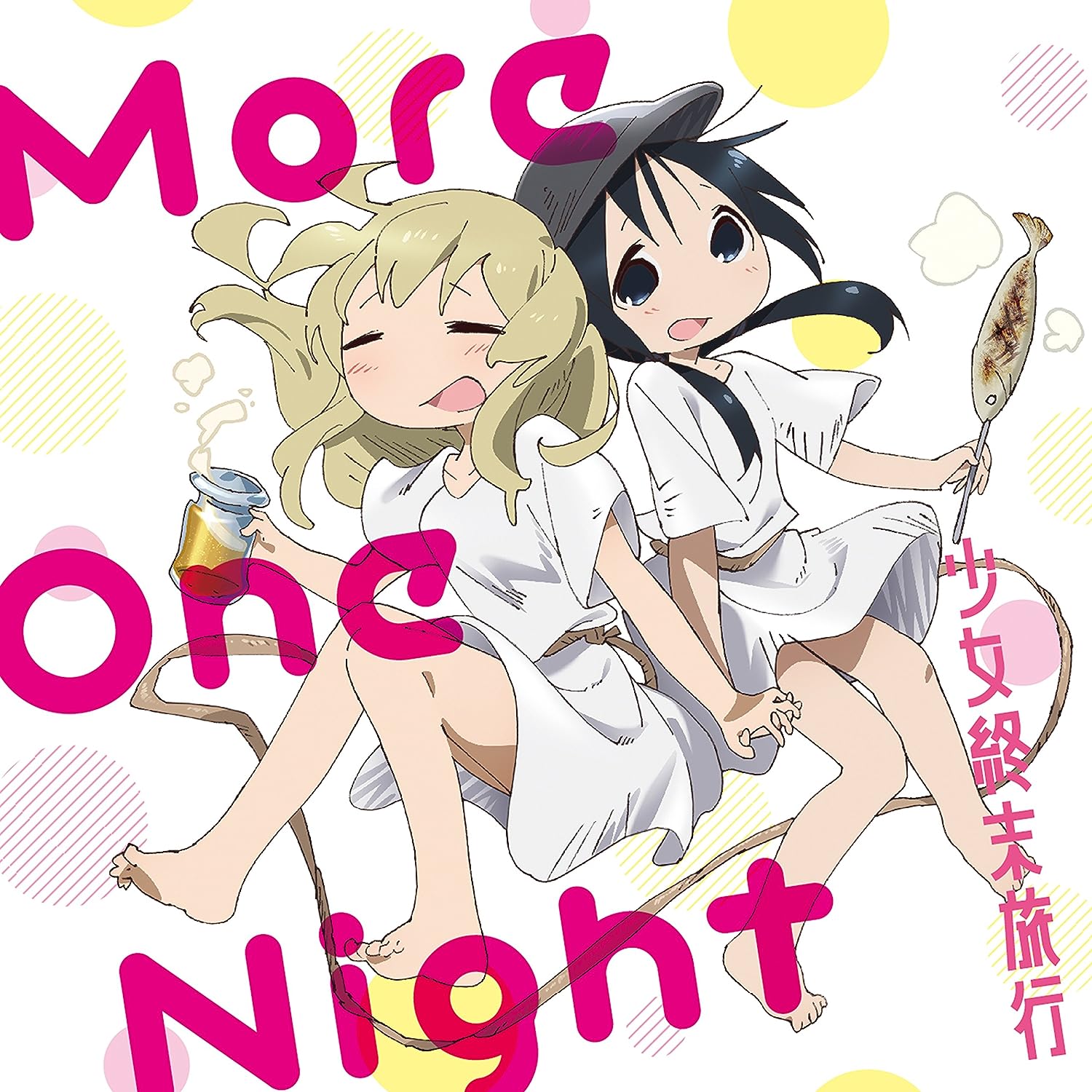 The first track, More One Night, is on a completely different note of happiness, it would be a sin to skip the ending credits!

If you listen carefully, you should be able to hear the girls title drop the anime a few times before the song ends. They way they say it is kinda cute and funny as it implies us wanting an encore, so that’s exactly what we got, an encore…

One more episode! Don’t end it!

The second track, 雨だれの歌 (Amadare no uta / The song of rain), took me by complete surprise despite having heard of it already in the fifth episode.

Kadokawa is seriously hunting this song down with all of their might. Don’t be surprised if you can’t listen to it haha!

I’m a hardcore instrumental fan, but this song manages to beat me in a way I’d least expected. The instrumental for this song is legit made up of sounds from banging cutlery and water drops! It has absolutely no shifting melody and sounds flat and monotone all the way from start to finish. I actually had to not include the instrumental track for this song in my phone since I can go bang shit up myself for the sounds.

So, where do the melodies come from?

The uplifting melodies in this song are solely delivered via the vocals of both seiyuu, I believe it has been a very long while since I’ve heard something grand like this, at least in Japanese music because before I’ve come to know anime, I have been involved in an A capella type of hobby when I was in my early teens.

You know, that — what Pentatonix is popular for.

Now this has truly been a blast (in my headphones) of happiness for me. And I thought that Summer Season was full of good stuff; Fall Season has me bought a hell lot more anime song EP’s and that’s kinda saying something.

I’m closing this with a notice that my 30 Day Anime Challenge is going to start in about an hour. And since you probably have listened to some (or all) of the songs featured here, I’m sure that the start is definitely on a happy note for you!

Thank you for reading and listening. Enjoy my entire month’s worth of content, ya’ll!