Welcome back to Appreciation Station! This time I would like to write a post about my appreciation for illustrators who work for covers which we often see on anime opening/ending EP’s. Yes, these guys are methodically the same as those who do arts for DVD, Blu-Ray, Character Song Album, Drama CD and OST CD covers!

For EP’s however, production budgets could easily be reduced by just not having an illustrated cover but I just won’t forget that MOST Japanese artists don’t half-ass it.

Sometimes they are even more accurate than the actual visuals

Anime visuals are illustrations used as the very front face of the show. They should technically be the absolutely best representation of said show and most of the time act as hype starters for massive attraction from worldwide audience. Please tell me if you ever got curious and felt like giving Just Because! a try… ‘just because’ of the visuals?

You can find them in any titles on MyAnimeList; the site stores up quite a lot of them.

Since the visuals’ job is now to potentially drag in viewers, there are no boundaries when it comes to being creative for other illustrations. It just happens that audio CD covers are lucky enough to have some of it!

Now, let me grab the first example of an EP illustration that definitely says more than the anime visual — Girlish Number.

Here is the anime visual:

And here’s the illustration for the ending single: 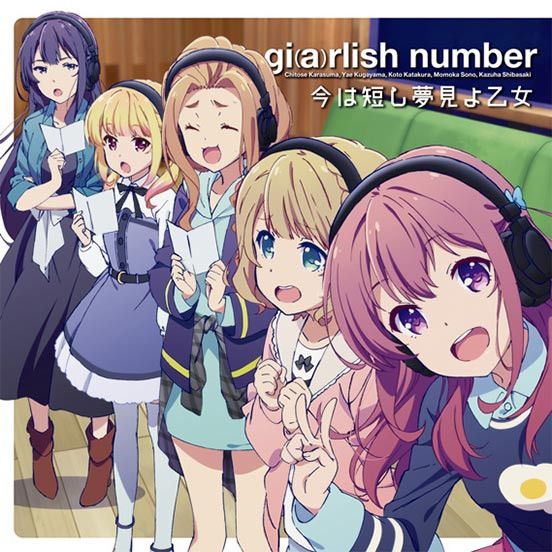 Now tell me which one is more accurate representation of the show.

Pictures say a thousand words so I will just let you decide: Anime Visual vs. EP Cover Illustration

They are all damn great so are you feeling appreciative for the artists like I do? 🙂

Here is some subtle comedy; only the fans will get this.
Imouto sae Ireba Ii.: Visuals vs. Opening Cover

A rare case where both are similarly accurate representation of the show.
Gabriel Dropout: Visuals vs. Opening Cover

They DID NOT have to, but they did it anyway!

Some anime singles also come with pictures of the singer(s) on top of the illustrated covers. Maybe it is the other way around but the thoughts do count!

There are like gazillions of examples out there ranging from character song to OST covers, but obviously I can only share a few or else this post would become a massive collection!

So there you have it. To keen eyes, anime is clearly more than just moving pixels; it’s a place for artists to gather up and work their talents into products of the multimedia franchise. Illustrations for anime related audio CD covers are probably among the most overlooked so here I am, through my appreciation, sharing my love of them with you.

10 thoughts on “Anime Audio CD Covers: They are visual delights”