But that’s really the point of this post being random.

Made In Abyss surfaced as unarguably the best non-sequel show of 2017 Summer Season, you even have MAL ratings to prove that but I’m not one to exactly use it as the sole measurement method.

We now live in the ages of internet. Worldwide communications are made easier in various methods. The one thing from internet’s floor that came out to be even more popular is the use of memes; a few pictures (or just one) and the message is laid out clear as day. While there are truly serious memes out and about, we just love to use them for comedy and Made In Abyss is absolutely no exception from that.

The show is dark and the one thing both you can I can expect out of it is dark humor.

This post will be a compilation of my own thoughts for the show and some dank memes in association. Spoilers beyond the anime included.

Every time he puts it on there’s a light glowing in unique pattern each time he does so. I don’t even think that the manga has reveal its cause, but what triggers me a tiny more is how the anime does this to pay respect to the source material. In the second episode however there is a depiction of an entity that heavily resembles Reg, said to be living further down below the sixth layer–the level original source material is at right now.

This can live as a big hint for future continuations of the main story.

Bondrewd did nothing wrong!

There is already a mention of ‘cartridges’ in the 12th episode so I don’t even think it’s a huge spoiler.

If we dare to think back to the past, to when scientific experiments know no bounds of ethics, we sure have come a long way from ‘harsh reality’. As time goes by, the softer ‘reality’ becomes for the people living on planet Earth.

We get to live in a much more comfortable world despite every other animals coexisting with us remain at the same level of threat. That was all quickly made possible thanks to unethical scientific experiments done by the batshit crazy heads we hail today as geniuses.

And ‘scientific experiment’ is still extremely vague; it ranges all the way from medical to psychological side of them! One of the most famous ‘thought’ experiments that is being embedded into many try-hard shows, attempting to sound smart is no other than Schrödinger’s Cat, which if we now consider animals to be equally worthy of making people salty, is absolutely just as horrid as Bondrewd’s own take of human progression.

You can dive into a sea of memes under his tweet.

Also you gotta admit, Bondrewd is pretty god-damn charismatic. My obvious bias aside, hats off to Morikawa Toshiyuki for voicing him so good

I tried googling his name out of curiosity.

Okay I’m joking, I did a science major in university so my mind pushes me to go this way; always truth before fantasy. Made In Abyss, despite boasting heavy amount of fantasy, is actually extremely subtle in great amount of reality behind it.

Just try it yourself. These are memes at their fine… fine days.

Before moving onto the next part, I would like to give credits to one of the best villains in anime history that is Bondrewd himself. He’s voiced by Morikawa Toshiyuki, whom is probably better known before as the voice of Lord Boros from One Punch Man.

Boros travels across the planets in search of a worthy fighter true to his given prophecy. Sure, he destroyed a part of Earth and attempted to fully go at it, but the man himself did nothing wrong also!

I think Morikawa is really born to voice fallen villains who have done nothing wrong.

I’ve said this in my review before but damn, the rack of hers is just beyond the level of a simple loli!

I am such a horrible person but don’t forgive me

What happened to that poor Inbyo which fell deep into the Abyss?

Feeling of loss: NONE.

I’m dead sure that Made In Abyss had absolutely no intention of making memes but the show just got itself what it unexpectedly deserved.

Catchphrases can make great characters even greater than they already are. In this show we have Reg’s 度し難い (Doshitgatai) / Irredeemable and…

Remember in the finale when she admits with a blush that… 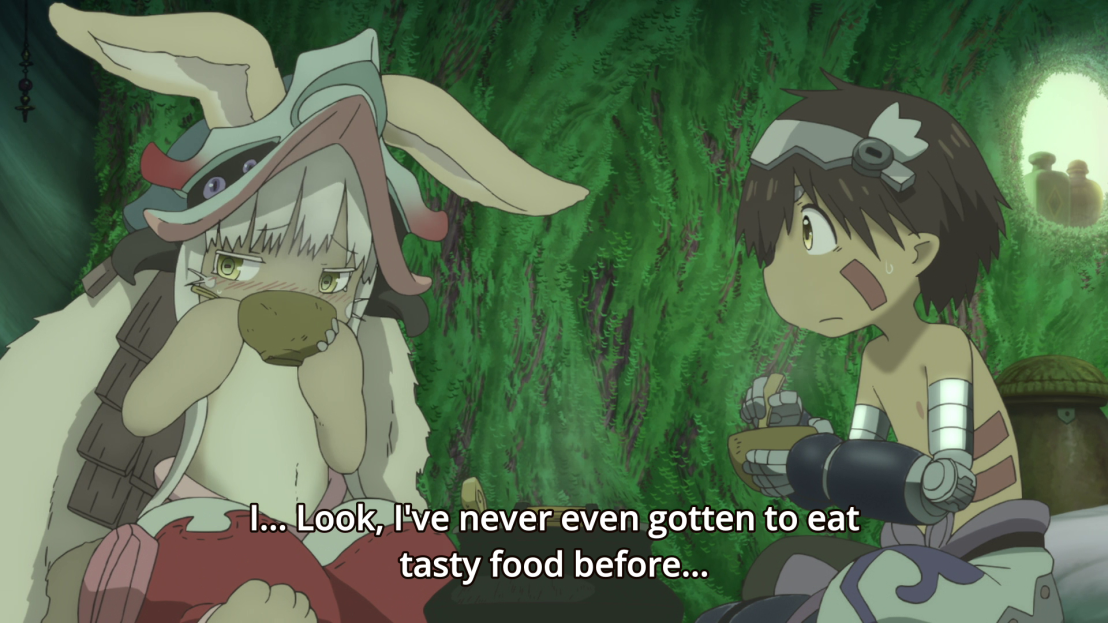 When it comes to good food and even better reactions, there is only one person I can think of on top of my own head.

Riko is good with her cooking and all. However, shall there be someone who can truly make you say ‘tasty’ without an ounce of regret, send Nanachi over to this guy right here!

Who knows, maybe he can really revert Nanachi back to her humanoid form with his cooking alone…

I’ve had great moments ranging from laughter to WTF in this one. This post will be updated the more I think about Made In Abyss…

Until then, see you down there!

3 thoughts on “Absolutely random thoughts for Made In Abyss”