After gushing out on how satisfied I was with IseSuma Character Song Collections, I think that I’m currently living in my own musical heaven after having purchased and downloaded three more singles that make up other anime openings.

It was already hinted on my Twitter that I was taken in by the eargasm. Before I get there however; just an unimportant update – Elze’s song, XOXO, has really grown on me a lot. As mentioned in my review, it is happy yet bold and aggressive guitar pop on top of being the highest tempo song in the entire collection. While in colloquial English, the X’s and O’s usually represent kisses and hugs, but in the case of this song, Elze refers them to kiss marks, as she says in the lyrics. Reow~

But once again, I am not a tiny bit surprised. It only makes me believe more as to why Uchida Maaya easily won Best New Voice Actress Award on its 8th annual event. She’s one of those truly gifted, talented seiyuu, born to sing like a happy-go-lucky girl. 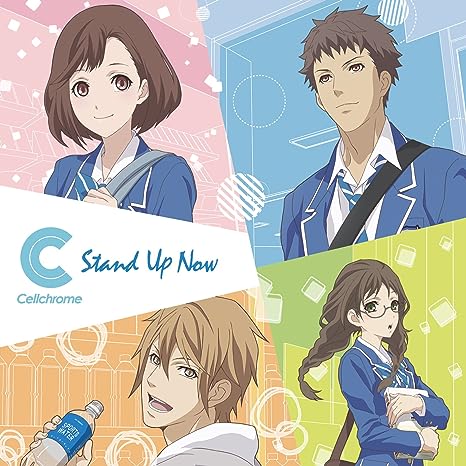 Unfortunately for me, this is the only regular version single that didn’t come with instrumental versions. To make it worse, there are only two tracks. 😦

But then who the heck am I to complain? Right?

Both tracks are exactly the kind of music I’d really love to listen during the summer. It’s also no coincidence that it is summer right now in Japan. I mistook them for being a full on pop boy band but after having a look, they are just your typical pop rock band that just happens to be boys only. And finally, once again there’s a male seiyuu unit on the rise given how female seiyuu absolutely dominate the industry. Well done and best wishes to you guys, Cellchrome!

I remember saying that I felt like dropping Konbini Kareshi because of its boring starting story, only to have my attention grabbed by the opening theme song, Stand Up Now. I can proudly say that I’m enjoying the song even without dreadful animation that was used in the opening sequence. Seriously, Studio Pierrot did marvelous jobs with Naruto openings and endings yet they couldn’t come up with something flowing for this show.

The second track, 120% ~BOOM BOOM SUMMER~, makes use of its pop attributes, taking the already popular beach rock and some of what I usually found in Jamaican pop. Boom!

All of which makes the ultimate summer beats! I somehow feel like playing beach volleyball whenever I hear this song…

Definitely the GOAT for me. Uncontested. Sure, the animation sequence in the opening is so good it is able to distract me from focusing on the equally important part–the music.

So, without anything to see, I closed my eyes and examined this instrumental masterpiece. Let me get this out of the way before I carry on with my analysis; the vocals are extremely well done from both seiyuu. But in the end I’m more interested in what the Japanese have always been doing well when it comes to musical art, the instruments. Absolutely, artistically unmatched.

The first thing I obviously noted was that even this song contains distorted electric guitar but it’s so deep in the background I was more than halfway through the song before I’d even realized. As far as I know, this is the kind of instrumental that is extremely hard to replicate in live performances as electric guitars usually end up overpowering every other instruments.

There is something mysterious about this track, as given by the choice of instruments. I’ve already talked about how trumpets and trombones give energy to music. This track has none of those and true to my belief, it gives me absolutely no energy. However, Deep In Abyss uses violins in a way that creates a fearful feeling that is equivalent to endless sorrow, something I’ve experienced when listening to Re:Zero‘s first ending (Styx Helix) despite having no violins present. Too bad for me I don’t even know that certain violin technique, but it’s a lot of short, quick loud bursts. If you’ve seen Your Lie In April then you’d know that even someone as crazy as Kaori-chan doesn’t use such a technique; she lets all of it flow.

The second MVP for this track has to be the piano. Absolutely, the piano! Without it, this song is practically losing the charm of mood changer. I’ve noticed that the notes are opposite of that in the violins, that is when the violins are bringing your emotions down, the piano does the opposite and that creates a surprisingly functioning combo. Woah! Who would have thought?

There’s a clear difference between giving you energy and making you find that energy, Deep In Abyss does the latter. While my musical emotion cowers in fear as I’ve found myself to be in a bottomless pit, the constant switches between minor and major notes are signs that I should still be looking for a way; a way to safety, a way to survive. With all of that said, it is clear that I tend to not listen to this song while I’m trying to sleep as it always keeps me on alert…

Just try it yourself, in your bed before you are off to your night’s snooze.

The second track in this single, 白笛の呼び声 (Shiro Fue no Yobigoe)/White Whistle’s Call, goes the opposite direction in bringing hopes instead of making you find it. It features the background harmonica tune that is very similar to the ending theme all the while lacking the obviously scary violin and piano, phew!

Seriously, efforts into making music that perfectly resonates with an anime’s theme is extremely underappreciated.

This should be a clear indication of my music taste; it’s rather wide. 😛
So here I have the odd one out.

What seems like a normal guitar pop that is usually found in every other popular anime openings happens to also be very smart in the instrumental technique once I’ve listened to the instrumental version. Before I go there however:

This single contains staggering seven tracks, the main one and the accompanying track, three of the main track sang by each of the three seiyuu that voiced the main heroines Karen, Chiaki and Aguri (as seen in the cover), and the instrumental tracks. As always, I highly appreciate them all! When sang in their own character, Karen’s voice is obviously the strongest and loudest given that she’s a tsundere…

Now, onto my instrumental analysis:

The guitar pop part of this track is relative low profile. The song wants to showcase its use of what we already love about 8-bit and 16-bit background music from retro games found in NES. I’m sure that we all have that music from NES games that we truly love but rarely any of them are fast paced, so GAMERS! brings all of that and speed them up, giving you a speedrun through your unforgettable memories.

While on the topic of retro games, which of those games do you happen to really enjoy the soundtracks from?

From me it’s undoubtedly Gun Nac. All of the stages have insanely memorable music. The boss fights are even more so.

The second track, すれちがいクエスト (Surechigai Kuesuto)/Password Quest, sounds exactly like something high school students would sing in a group on graduation day. Yes, it’s pretty much like when Love Live! School Idol Project had its Aishiteru Banzai moment.

I indeed am fully devoured by the musical world right now. Just give me some more time as I find the opportunity to write something that’s actually about anime… 😀