I did a write up on the topic of seiyuu and music so I might as well give out my view on this piece of work. It was among many works I’ve had to watch in order to make sure that the topic I wrote about was not full of crap.

Since this will be my first full review, I’d like to take this chance and declare right here and now that all of my ‘full reviews’ will be exactly as I intended for them to be; full on with all the things to talk about. Oh, and spoilers!

Right. Let’s get to the minor but vital details for the true anime geeks.

I’m just going to be lazy and take the synopsis straight from MAL:

Dreaming of becoming a top-tier professional in the fast-paced, competitive world of voice acting, rookie Futaba Ichinose frantically scurries around, searching for auditions and performance sessions. Rubbing elbows with some of the biggest names in the industry, she tries to find her own unique voice and style.

Along the way, she befriends two important allies: Ichigo Moesaki, an aspiring idol who claims to be a princess from another planet, and Rin Kohana, a cheerful child actress who tries her best to balance her career and school at the same time. Together, the girls brave the ups and downs of the entertainment industry—but as for Futaba, whose performance assessment at her agency is just around the corner, her career might be over sooner than expected! Sore ga Seiyuu! is a humorous and sincere celebration of the industry that gives anime its voice.

So, we have 13 episodes of Futaba and her two (side) girls limping in voice acting adventures. For an anime that’s quite episodic in terms of plot, little happened in its overall series. Though, I certainly am not saying that little is bad; it certainly is better than a lot of crap.

For the first episode there was even a narrator! I wasn’t sure which direction this anime wanted to really take at the time.
There was also this Shirobako-like talking doll Korori who gives tips about voice acting industry. At this point I expected Sakaki Shizuka to return in any minute. 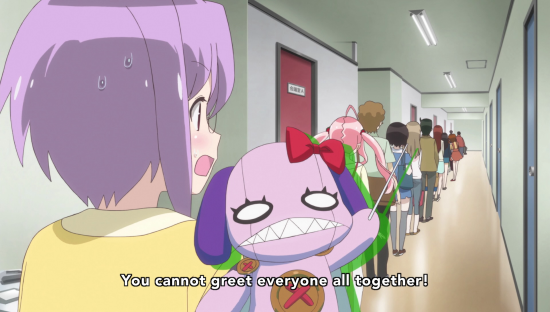 I think the bottom right picture is pure savagery.

I was a little sad knowing that it wasn’t going to happen, then I became happy knowing that Futaba and the squad would take me to an even farther adventure into the voice acting industry.

Like most great slice of life anime out there exists the anticipated part where either the main or side characters (or all of them) experience a ‘hitting the wall’ moment. This didn’t begin until just before halfway into the series (episode 6). Sore ga Seiyuu! handled it rather well, I have to say.

And this is me scratching the surface of the overall story. I’ll get into fine, minor details soon. I promise 🙂 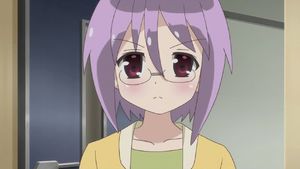 The other one with ‘Yazawa Nico‘ symtom.

The last one is a confident child.

Notice how I pretty much just pulled characters’ names from other anime into descriptions for two out of three girls? It says something along the lines of ‘nothing new’.
That being said, it’s also not a bad idea to leave characters to certain archetypes. The mangaka and/or Gonzo didn’t try to fix what wasn’t broken in the first place, proven by the fact that both Aoi and Nico are extremely popular in their own ways.
When used as exploration vehicles, just like driving off road, these girls will prove the show’s enjoyment through excellent obstacle tackling rather than purely relying on their own characteristics.

Characters aren’t even the strongest point of the show…

Simple as it can be, Sore ga Seiyuu! definitely went the low budget route. It’s shiny and bright, derp shots are not incredibly noticeable (shame on you Dragon Ball Super). Sometimes, just sometimes though… they just don’t get the visuals right. This leave you to either blame the animator for not animating a person sobbing/crying properly or blame the voice actor/actress for going overboard.

Here I am being lazy again since I have already done a review on it.

While the insert songs stuck to the same Earphones style (which is great), most of the 45 pieces of background music were easily forgettable. The ones that managed to stick with me were mostly emotion inducing, maybe thanks to the piano/acoustic guitars. I’ll list them out in case you find them a good listen too:

Twelve versions of the ending song?!

Ah, man. This will be a bigger praise than the opening song, really. I just love it when massive attention to detail is given to something most people would consider as a trigger to hit that ‘next button’ on their media player.

It’ll take you to watch the anime itself or work hard to find all twelve different versions of the same song.

What are the differences?
Firstly, the verses; none of which are the same in any given episode.
Secondly, the ‘request corner’; basically a musical parody style where snips of songs from other anime are featured.

1. Futaba is a famous seiyuu magnet; she gets to meet all of these people! *drools*

While we all know the works behind this manga and anime (that being the mangaka is also a voice actress and the people who made cameo in her work are good friends and/or colleagues), it’s a good time to remind ourselves that we are watching anime therefore we want to see things done in anime and not anywhere else.

Everyone wants to get to know others in an easy, friendly manner. While we all know that anime is certainly not physically real in this world we live in, we still treat anime characters as if they were somewhat humanoid.

The makers of Sore ga Seiyuu! have made it so that you can get to know the characters through Futaba’s very own point of view.
Being an anime about voice acting, it is ever so natural to show the real word side of it too, so here is me pretending that I’m meeting these three girls; I’d be as happy as they are.

2. The anime may be episodic but damn, each episode has left me to think about something.

It’s all about the quality and not quantity, after all!

If Shirobako could cramp a masterpiece of script writing into 25 minutes episode then someone’s bound to do it better or worse, definitely not the exact same. However I’m not here to compare the two shows from head to toe. Sore ga Seiyuu! definitely had more of that episodic feel and that’s definitely one of their strongest card in quality. Let’s look into some episodes where I was left to think a little harder than I should have.

First up we have generations feud.

Ichigo being the youth of Generation Y. This topic is heavily debated inside and even more so outside of anime. 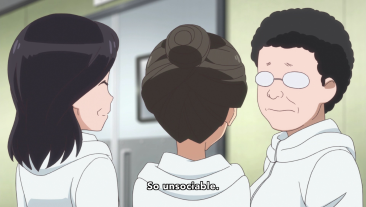 And of course, the feud is almost always between Generation X and Y…

I’m not going to debate anything here so just have a think about it. There are always three sides to an argument; the two sides and the truth.

Ichigo is being talked down on because she has such high hopes of becoming successful in a ‘respectable age.’

Again, society is so shit with making up these things. Let’s take a look at the same conflict from Ichigo’s side this time: 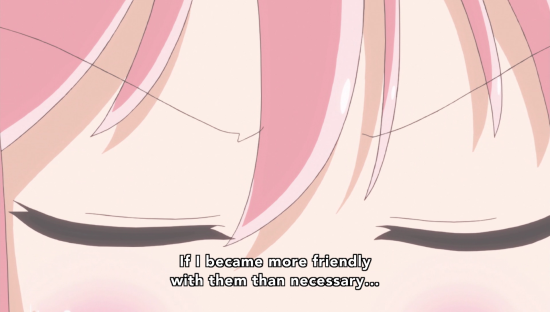 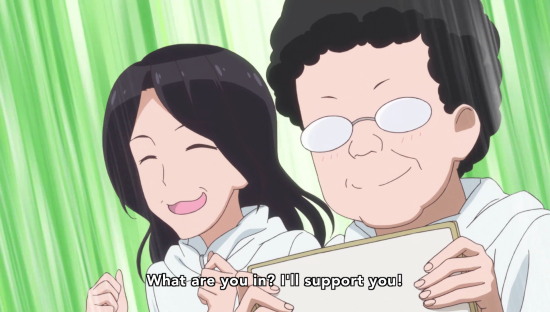 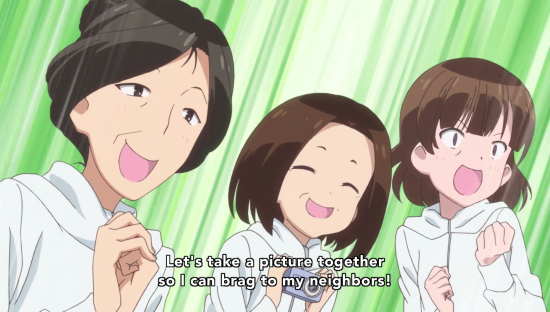 Is her dream too far from reality?

The feeling you get when you acknowledge in losing your job.

Voice acting as a job is a little more complex than this anime has shown us. Futaba definitely portrays the right kind of reaction for a newbie in this position. 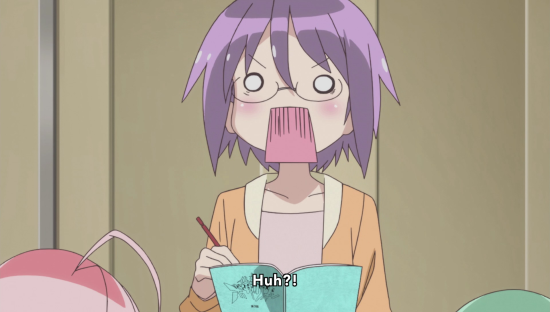 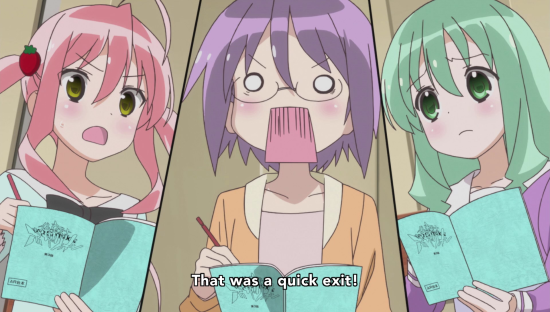 Which led her (and probably even you) into this….

Fan trivia here (again): Futaba is voiced by Takahashi Rie who at the time was truly a newbie in voice acting industry, having only voiced supporting characters in Shirobako. Like Futaba’s success in anime, it’s being mirrored to the real world where Takahashi-san’s success include extremely popular roles such as Emilia from Re:Zero and Megumin from KonoSuba series.

Women and their weight.

Honestly, this one is a long living insecurity. It’s not just in Japan but a lot of female idols are more horrified of a weight scale than spiders. Need I say more about this?

The world does not revolve around you.

While I can explain, if you have read up to here already then please just do me a favor and watch the first 6 minutes of episode 5. Right after the opening song I (and eventually you) was treated with a sly comedy while slowly leaning into giving us the issue I stated. Also, props to Gonzo for giving Ichigo that bull sound. Hilarious!

Three people with all different schedules, trying to work as a unit. Have you worked on a project as a group before?
Worse off, you cannot do it in class or at work?
If so then this is self explanatory.

There’s always someone better than you.

Have you ever noticed that sometimes the seiyuu used for one medium is different to that of another?
This case happens more often between anime and drama CD’s than anything else.
Sometimes it’s simply because of the contract; seiyuu signed them to voice for anime and nothing else. Sometimes it’s to do with changes within the production company, budget issues and so on. Sometimes however it’s just because someone out there is better than you.

A lot of people (myself included) are quick to dig into tropes when we watch anime; we do the same in Hollywood films.

What not a lot of people dig into today are rare, precious techniques that were used in late 90’s Hollywood films. They leave a huge impact in the story, as viewed by ‘critics’.

Two of those I’ve come to notice and love.

It is used to really bring the focus (and your attention) to what matters, especially in a character’s point of view.

In episode 7 we get to exclusively take a tour through Konno’s character (development) story. The anime made it clear that Konno is great at what she does and nothing has changed over the years. However, like all greatness in a person, there’s always doubt in oneself.

A congratulating hug back in high school.

Sore ga Seiyuu! is listed as a comedy anime, therefore time for memes!

Sore ga Seiyuu! paved on the voice acting route of Shirobako by miles farther. It may not be visually worth fapping over but it definitely doesn’t suck where you would expect it to be. In that respect, it certainly gets my approval for not hyping fans too much and came out to be better than what was being advertised.

Because that’s what it means to not be in the mainstream; Sore ga Seiyuu! is most definitely an underdog among vast love letters to anime.